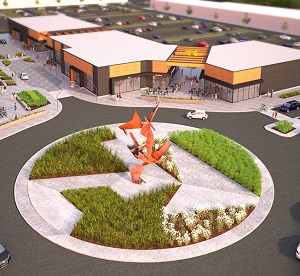 The project, located in the Duplessis neighbourhood, will include about 30 retailers in 13 or 14 buildings that could total 500,000 square feet on a site of around five million square feet.

Ilot Mendel would not be possible without the upcoming outlet of the Swedish retail giant in Quebec City, says Jean Laramée, executive vice-president development at Cominar REIT. He discussed the project at the recent Quebec City Real Estate Forum.

The first phase of the project, with an estimated price tag of $115 million, will open next spring.

An “oasis of calm”

Located on the site of a former landfill, the project is centred by a traffic circle and will be designed as an “oasis of calm” where people will want to walk. “We want people to stay.”

“We certainly would not have done the project if there were not an Ikea, or it would have been something completely different,” Laramée says. “The destination will allow us to stand out.”

Ikea’s new 340,000-square-foot, LEED-certified store in Quebec City is scheduled to open late this summer. It’s located south west of the Charest (40) and Duplessis (540) Highways at the intersection of Mendel Street and Blaise Pascal Avenue.

Ilot Mendel will attract a population of some 900,000 – meaning not just residents of the Quebec City area but people living outside the region, says Laramée.

He notes Ikea, which years ago had a store in Quebec and is now returning to the city, opened an online order pick-up centre about 18 months ago which became “an instant success.”

Aside from Ikea, the site will be home to an outlet of the French sporting goods retailer Décathlon.

Décathlon opened its first Quebec outlet a few weeks ago in the Cominar-owned Champlain Mall in Brossard on Montreal’s South Shore. The store opening “completely outperformed expectations” and was one of the chain’s most successful openings outside of France. It shows innovative tenants can stand out in a highly competitive market, he says.

“The combination of Ikea and Décathlon will make this site really attractive,” says Laramée, adding Cominar is in discussions with dozens of tenants, including others which do not have a Quebec City presence. Given the presence of Ikea, the accent will be placed on attracting home decor stores as well as restaurants and entertainment.

Elsewhere at the Quebec City Forum, Patrick Soucy, vice-president at Colliers International (Quebec), noted the commercial vacancy rate in Quebec City is now at 8.9 per cent. With 700,000 square feet added in the last few years, the Quebec City area has 19.8 million square feet of inventory, making it the seventh-largest market in Canada.

The current 8.9 per cent vacancy rate – significantly higher than the 3.1 per cent vacancy rate 10 years ago – makes the office market more stable, reasonable and competitive. Vacancy rates will likely increase in coming years due to projects on the drawing board such as Groupe Dallaire’s planned Le Phare mixed-use project, he says.

Few office projects have been delivered since 2016. Those that have been completed have been small, says Marie-France Benoit, senior director, commercial products, data solutions at Altus Group. Seven class-B projects of around 50,000 square feet each, mostly on the South Shore of Quebec City, have arrived on the market in the last few years.

A number of tech firms in the city are developing owner-occupied, single-tenant head office structures that also incorporate R&D, production and distribution facilities, she says.

One of the firms which is developing a build-to-suit project is biotech firm Medicago. It is constructing a 500,000-square-foot facility over four phases in the Espace d’innovation D’Estimauville, a new high tech industrial park east of Highway Henri-IV.

With a vacancy rate of 2.4 per cent, there are few options on the industrial leasing market, noted Benoit and Alain Roy, general manager, Quebec of Altus Group. There is a shortage of available industrial land in central areas and increasing land costs are limiting development activity.

About 48 per cent of industrial space in the city is owner-occupied, while Cominar holds about 15 per cent of the city’s inventory.

Meanwhile, the recent announcement Quebec City will soon get a $3-billion tramway line received mixed reviews from real estate professionals at the forum.

The 23-kilometre line, which will include 3.5 kilometres underground in the Old City and Parliament Hill areas, is slated for completion in 2026.

Charles Croisetière, director of development at the Complexe de la Capitale in Lebourgneuf , says the project would have no impact on his company.

But Steven Bouffard, leasing manager, office and industrial properties at Cominar, says “we’re pretty happy with the route,” which would culminate near the new Ikea and Cominar’s Ilot Mendel project.