Confidence is at an all-time high due to historically low vacancy rates in almost all of downtown Toronto’s office sub-markets, but how long will the good times last? 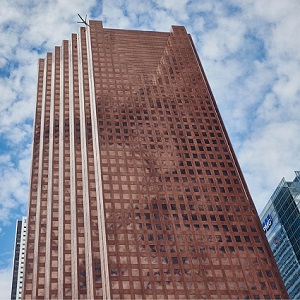 “This is a great office leasing environment that we’ve all benefited from, but there are still some significant challenges,” said Mike Scace, Cushman & Wakefield’s senior vice-president of office leasing, while moderating a panel at The Real Estate Strategy & Leasing Conference at the Metro Toronto Convention Centre on Sept. 19.

“The flight to quality has created gaps in older stock. New tech is changing the competitive landscape.”

Some of that’s attributable to trying to attract and retain a millennial workforce, which he said is expected to comprise 50 per cent of Canada’s total by 2020 and 75 per cent of the total by 2025.

Changes for the better at Scotia Plaza

Dream Office REIT (D.UN-T) leasing director Allison Marsales described how her company and its partners made almost $90 million in improvements to Scotia Plaza to attract new tenants after acquiring it in 2012. The improvements included renovating lobbies, overhauling elevators and adding more light.

“We created an open plan that had a very different look and feel than what people probably thought of originally,” she said. “We were well-rewarded as we’re basically leased up right now.”

While creative industries have traditionally favoured such designs, Sinofsky said it’s now becoming the preferred way to go for all business sectors.

“Every three years, the demand for a building that’s full of green initiatives increases by 100 per cent,” he said.

“Buildings are now trading at a seven per cent premium when they have green initiatives. They’re also apparently operating at least 14 per cent more efficiently and more effectively.”

The next environmental wave to hit the Toronto office market will be net zero carbon buildings, according to Sinofsky. He said Oxford and the Canada Pension Plan Investment Board will try to achieve that standard at their forthcoming tower at 30 Bay St.

“This is trying to get ahead of the curve because a carbon tax is coming,” he stated. “Not only is it the right thing to do for the industry and our cities and the future, but there’s an economic part of it that we need to understand as well.”