The Well, one of Toronto’s largest ongoing downtown developments, has now leased 98 per cent of i... 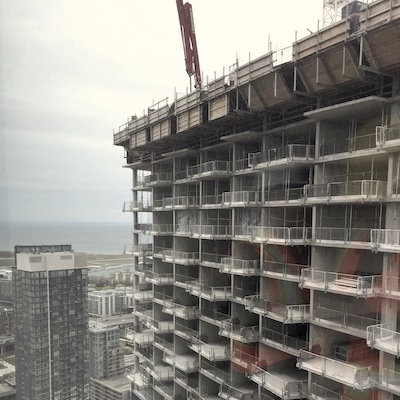 Construction continues at The Well in Toronto, which is slated for completion in the spring of 2023. (Steve McLean, RENX)

The Well, one of Toronto’s largest ongoing downtown developments, has now leased 98 per cent of its 1.17 million square feet of office space, its developers say.

Allied Properties REIT (AP-UN-T) and RioCan REIT (REI-UN-T), which each own a 50 per cent stake in the commercial component of The Well, reported Wednesday they have signed an unnamed “leading technology organization” to a 89,964-square-foot lease for a term of 12 years. The lease is to commence Nov. 1, 2023, and leaves one floor (29,886 square feet) remaining to be leased.

“This is an important milestone in completing the premiere mixed-use urban development in Toronto,” said Michael Emory, Allied’s president and CEO, in the announcement.

“The Well has become a large-scale success for all concerned, one that’s reshaping Toronto’s downtown core and propelling the King and Spadina neighbourhood to even greater ascendency.”

Allied and RioCan also announced the retail component of The Well is 66 per cent leased to 41 retail users. The REITs consider that to be well on track, with the retail segments of the development expected to be available for grand opening in mid-2023.

Efforts to lease the remaining commercial space are underway.

The commercial component at The Well comprises:

– significant third-party digital signage on the northwest corner of Front & Spadina; and

The Well’s office component is targeting a LEED Platinum certification, slated to include operational, environmental, life-safety, and health and wellness systems.

Residential components of the development

The overall project includes seven towers and mid-rise buildings on the 7.8-acre site.

RioCan Living and Woodbourne’s 46-storey FourFifty The Well will have 592 residential rental suites.

During an earlier update at The Well in May, the developers said 90 per cent of the condo component, representing more than 650 units, had been sold by Tridel.

About RioCan and Allied

As of March 31, 2022, RioCan’s portfolio was comprised of 204 properties with an aggregate net leasable area of approximately 36.2 million square feet (at RioCan’s interest) including office, residential rental and 13 development properties.

Allied is a developer, owner and operator of urban workspace in Canada’s major cities and network-dense UDC space in Toronto.

Allied’s mission is to provide knowledge-based organizations with workspace and UDC space that is sustainable and conducive to human wellness, creativity, connectivity and diversity.