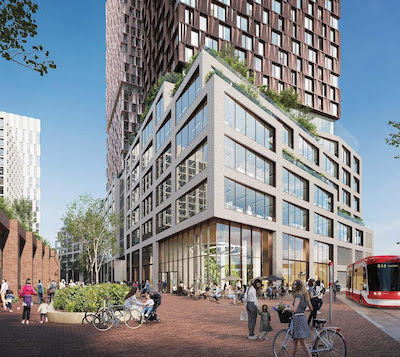 Avison Young has begun marketing six floors and 251,552 square feet of boutique office space as part of the Canary Landing mixed-use development at 125 Mill St. on the eastern edge of downtown Toronto.

Canary Landing is being developed by Kilmer Group, Dream and Tricon Residential, with Dream acting as the office building’s property manager.

“It’s something very different from what an office user typically gets from an office building. It’s more and more important now, as companies are looking at where to lease their office space and how to energize their employees and bring employees back to the office, to look at things outside of the physical office space like amenities and green space.”

What Canary Landing has to offer

The second through sixth floors at Canary Landing will have floorplates averaging around 50,000 square feet and there will be six rooftop terraces, each comprising approximately 1,000 square feet. There will be 4,200 square feet of retail at ground level, residential units above the office space and underground parking.

The building is targeting LEED Gold and WELL Core and Shell certifications.

Canary Landing will have direct access to 24 acres of dedicated parkland at Corktown Common. It’s directly adjacent to the Cherry Street Toronto Transit Commission streetcar loop and in the future will offer easy access to an Ontario Line subway stop and a GO Transit stop.

Since it’s not far from the Great Lakes Waterfront Trail, Canary Landing will offer secure bicycle parking and shower facilities for those who prefer to bike, jog or walk to work. It will have a Walk Score of 90, a Transit Score of 96 and a Bike Score of 100.

There are more than 6,100 new residential units within a 500-metre radius of the rapidly growing area and about 22,000 people live within a kilometre.

“I think adding office will be important because, as everyone has been working from home over the past few years, it’s going to change the way companies evaluate the locations of their office space,” said Armstrong.

“Putting offices in a neighbourhood like this could be something really cool and make it a true mixed-use neighbourhood.”

Armstrong anticipates a high level of interest and activity for Canary Landing and Avison Young has already had preliminary talks with a number of groups. He expects a variety of tenants to be interested, led by the technology sector but also including professional services and financial services companies.

Armstrong surmises Canary Landing will attract a few tenants looking to take an entire floor or more. He doesn’t want to consider splitting up full floors this early in the leasing process.

“A lot of the deals that have been happening throughout the pandemic, and especially in 2022, have been in new developments,” he said.

The retail component of Canary Landing will likely act as an amenity for building occupants and could possibly include quick-service retail, a coffee shop or a bank branch. Armstrong said it’s too early to start leasing that aspect of the building.

Tenants are expected to begin fixturing their spaces in the third quarter of 2025 and Canary Landing should be fully occupied and operational in early 2026.

Armstrong said competition for premium downtown Toronto office space has been heating up and driving up rents, particularly in new developments, which have been beneficiaries of a flight to quality by companies.

“It’s not the same activity level as it was pre-pandemic, but it’s certainly getting to a point where we see that happening toward the end of this year,” said Armstrong.

Don Wilcox Residential Transactions Greater Montreal Apr. 1 2022
Steve McLean Business reporter
Steve is a veteran writer, reporter, editor and communications specialist whose work has appeared in a wide variety of print and online outlets. He’s the author of the book Hot Canadian Bands and has taught reporting to college students. He is based in Toronto.