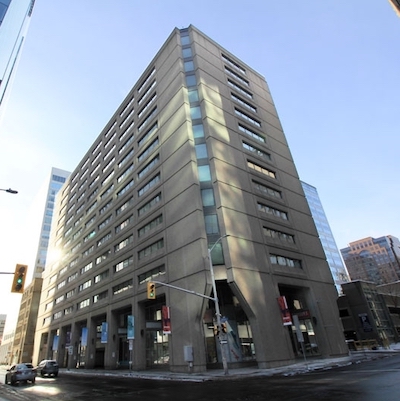 Groupe Mach has acquired, and will reposition, this 14-storey office tower at 110 O’Connor St. in downtown Ottawa. (Courtesy Groupe Mach)

A vacant downtown Ottawa office building just minutes from Parliament Hill is a prime candidate for repositioning, according to its new owners Groupe Mach.

Mach acquired 110 O’Connor St., a 202,000-square-foot tower in the heart of the city’s business district, as part of a portfolio from the former Cominar REIT. It paid $40 million for the building, which has been vacant since its former tenant, the Department of National Defence, departed in 2020 for a campus in the city’s west end.

DND has been consolidating many of its former properties across the National Capital Region at a newly renovated suburban campus based around 3500 Carling Ave.

The Montreal-based firm, which closed just a few weeks ago on a $1.5-billion portfolio of office and industrial assets as part of a privatization of Cominar, is considering two options for the building.

“We see a huge opportunity to reposition the property as a new office complex and/or a new residential complex,” Chiara explained. “So, we’re preparing proposals to do both. One or the other will happen and a decision will be taken in the next few months to redevelop that site in the core of the downtown area in Ottawa.”

The building was constructed between 1970 and 1972. It features floor plates of about 15,000 square feet and contains four elevators and 99 parking spaces.

One of the city’s main downtown transportation hubs is just a few moments’ walk from the front door.

If it were to remain as office space, a block of this size could be valuable considering the federal government’s goals to upgrade its office tenancies to more modern and sustainable facilities. A private-sector tenant might also be interested.

“In a general sense, I would say there’s probably a few options for a building like this, given its size and scope and location,” Brooker explained. “Being a large block of continuous office space, I think there is certainly an opportunity to reposition it as an office building and maintain it as an office building and attract large users – maybe the federal government at some point down the road, or other large users in the market.”

“A building like this would have runway to continue as an office building.”

It would be particularly attractive to the federal government if building systems were upgraded to modern standards to make it more sustainable and reduce greenhouse gas emissions.

“They still occupy a lot of buildings that don’t meet those new standards,” Brooker said, “so to be able to deliver a large block of continuous space that can meet those standards, certainly in my mind, would be attractive for them.”

Despite the ongoing challenges from the COVID-19 pandemic, the Ottawa office market has remained one of the most stable on the continent.

If Groupe Mach were to opt for a residential repositioning, Brooker said both the building and location are well-suited to such a project.

“With a building like this as well considering its site, floor plate and dimensions, it would also make a good conversion to either residential or hospitality potentially,” he said. “It’s pretty flexible, a building of this nature, in the downtown market.”

The proximity to a large pool of jobs as well as the nearby transit hub would both be key attractors for potential new residents.

Groupe Mach also alludes to some of these factors on its website, describing it as a “modern building with large windows” and noting the district includes many restaurants, shops, businesses and entertainment venues.

– With files from Danny Kucharsky