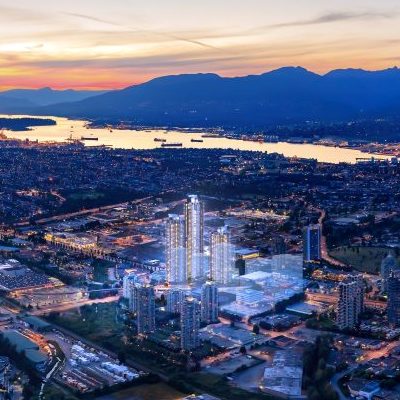 Onni Group of Vancouver has started construction of Two Gilmore Place in downtown Burnaby. It will be the city’s tallest tower when completed. (Courtesy Onni)

At 216 metres and 64 storeys, Two Gilmore Place in Burnaby’s Brentwood town centre would be the tallest in Metro Vancouver and the tallest residential tower in Western Canada, said Onni chief of staff Duncan Wlodarczak.

“It will serve as a landmark building at the western entry to Brentwood Town Centre,” he told RENX in an exchange of emails. “The first phase of the project is under construction today, which also includes two additional towers at 51 and 43 storeys, respectively.”

At the corner of Lougheed Highway and Gilmore Avenue, the building will join a quickly evolving cluster of massive towers in Brentwood — a once-suburban neighbourhood which now has a skyline that rivals those of downtown Vancouver and Burnaby’s Metrotown, to the south.

“Across the entire project, we have (also) created an extensive offering of over 75,000 square feet of private amenities that will set a new benchmark for residential amenities in Burnaby and British Columbia.”

The Gilmore Place complex will be bisected by the Gilmore SkyTrain Station on the western edge of Brentwood. The district is one of a few town centres earmarked by Burnaby planners for high-density, mixed-use development in the city.

The Brentwood tower would climb higher than downtown Vancouver’s current tallest tower, the Shangri-La Vancouver residential, hotel and commercial skyscraper. It was completed a decade ago and stands at 201 metres, according to The Council on Tall Buildings and Urban Habitat’s database.

Calgary has several office towers which rise higher than Two Gilmore Place will stand. Edmonton’s Stantec Tower office building is also taller at 249 metres, according to the database.

Two Gilmore Place might not hold the distinction of tallest residential tower in the west for long, however. In Edmonton, Alldritt Group told RENX it continues proposal and design work on the 80-storey The Quarters Hotel and Residences, which could rise to 280 metres if and when it is completed.

In terms of Onni’s overall portfolio, Gilmore Place is one of the largest mixed-use developments the developer has undertaken, Wlodarczak said.

Onni is not strictly a condo developer.

“We build all asset classes, including multi-family market rental housing, commercial office, retail, and industrial, as well as hospitality properties in the U.S. and Canada,” he said.

The developer has been in business for more than 50 years with projects in Los Angeles, Seattle, Chicago, Phoenix, Toronto and Vancouver. Onni says it has built more than 15,000 homes and manages more than 7,200 rental apartments.

“Onni owns and manages all of the projects we develop,” Wlodarczak said.