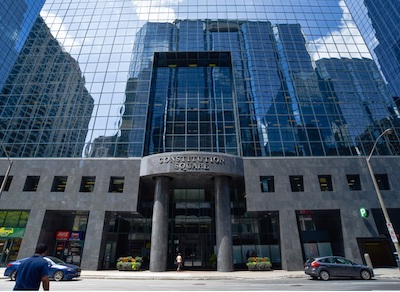 Constitution Square in Ottawa is receiving a multi-million-dollar refurbishment from its owners, TD Asset Management and Canderel.

Ottawa’s largest office complex, the million-square foot, three-tower Constitution Square, is in the midst of a multi-million-dollar series of upgrades as its owners seek to reposition the property as the “pre-eminent building” in the city.

Constitution Square is owned as a joint venture by TD Asset Management (via the TD Greystone Real Estate Fund) and Canderel, which also acts as the property manager. They purchased the class-AAA asset, which spans a full city block, in late 2017.

Forgestone Capital was also involved in the acquisition, and continues to act as strategic asset manager.

At 1,065,445 square feet of gross leasable area, the linked towers are in the Parliamentary Precinct in downtown Ottawa. They’re populated by a mix of public and private-sector tenants including several government agencies.

“It’s our largest investment in Ottawa, so we are really excited to be part of this,” said Jimmy Buzaglo, TD Asset Management’s vice president, real estate investments.

In an interview with RENX, he laid out the partners’ plans to improve both interior and exterior facets of the complex. The refurbishments are being done in part to help attract a new tenant, or tenants, when Public Works vacates a 160,000 square foot lease in 2022, and in part because the oldest portions of the towers are now more than 30 years old.

Work has just been completed on two aspects of the project, while other major upgrades are slated to begin in the next month or two.

“We identified that the conference centre, which was highlighted as a very significant amenity for our tenants in the building, needed a refresh,” Buzaglo said of the 4,300-square-foot facility. “All new equipment, all new sound system, all new paint, walls, furniture. It honestly looks brand new.”

The fitness centre got similar treatment.

“This is a full-fledged gym. I would argue that you wouldn’t even need another gym membership if you were a member here.”

TDAM and Canderel have applied for permits to allow a major renovation of the lobby and other public areas both inside and outside Constitution Square, construct a new tenant lounge, modernize elevators in Towers 1 and 2, upgrade end-of-trip facilities in underground parking and bike storage, improve way finding within the complex, improve existing tenant terraces and more.

Buzaglo said the main public lobby will be a major focus.

“We really wanted to improve and animate the lobby,” he said. “We really love the blue granite that is the character of this building, we wanted to maintain that, but we felt the lobby needed a refresh.

“Really what it’s about is more of this collaborative theme where tenants want the ability to jump out of their offices, go down and sit down or collaborate.”

That’s also the reason for repurposing some ground-floor retail space to construct a tenant lounge.

And, despite the breadth of the work, he said it is expected to be complete this year.

“There will be three or four of those, plus all of the elevator lobbies.” 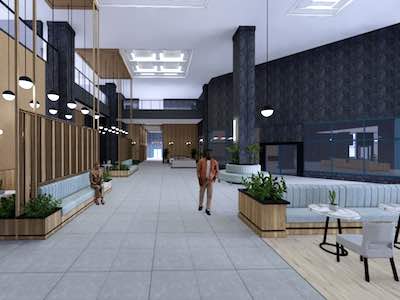 Rendering of an interior public space at Constitution Square in Ottawa.

As building manager, Canderel will be hands-on with the project, and responsible for leasing the block of space which will be available in 2022. Interestingly, the Montreal-based company was involved in building Constitution Square (constructed in three phases in 1986, 1992 and 2007) for OMERS.

“So we’re back at the table in an ownership position (as) partner with TD Asset Management,” said Mike Vilner, Canderel’s vice president and national lead, leasing. He said the complex is currently 93 per cent leased.

The renovations will build on the complex’s LEED Platinum and WiredScore designations.

“We have a focus on a good balance between private sector and public sector (tenants),” Vilner said. “Obviously the federal government is a large tenant of ours and we want to continue working with them and helping them grow within the complex.

“We have a strong push to try and find tech companies, professional service companies like law firms, accounting firms.

“There is also the balance of our existing tenants who, for a long time, were seeking space to expand. Now that we have some flexibility with the space coming back, we have the ability now for them to expand.”

The Ottawa office market has rebounded mightily during the past couple of years, with the citywide vacancy rate falling from about 10 per cent a few years ago to 5.1 per cent in CBRE’s Canada Market Outlook 2020.

This will leave Canderel with some options, provided the trend continues. Vilner said there is also a good chance Public Works will want to retain the space and move in a different government tenant.

With about 30 per cent of the federal government’s own office space in significant need of modernization, the feds are looking at many years of departmental shuffling to make those improvements. Some will utilize swing space, others will find permanent new homes.

There are several major developments in the ground (such as Zibi, the destination for the Public Works tenancy which is leaving Constitution Square) which will deliver new office space in coming years. But, demand is expected to remain strong from Ottawa’s growing tech sector, the government and its support agencies.

“Vacancy rates in Ottawa are continuing to trend downward,” Vilner said. “We really see a flight to quality, from most tenants in the market. Most tenants are sacrificing higher rents to get into better buildings to retain top talent and provide an enjoyable workspace and work experience for their staff.”

“It is becoming a competitive market but there’s not a lot of space available, or not as much as there was,” he said. “With all of these improvements and the opportunities at Constitution Square we really want to set it apart from all of our competitors and reposition the complex as the pre-eminent building in the market.

“It really is the best place to be in Ottawa.”