These are heady days for the commercial and multi-residential real estate industry in Canada’s National Capital, a fact driven home when Altus Group’s Colin Johnston and Julianne Wright provided a market overview at the Ottawa Real Estate Forum on Tuesday. 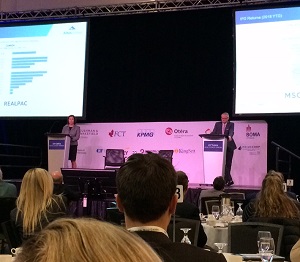 “The city is currently experiencing a near-unprecedented amount of real estate development and investment,” Wright told the 600-plus attendees at the Ottawa Conference and Event Centre.

Among the highlights was this nugget, from Altus’s most recent investment trends insights survey: “Ottawa multi-tenant and its single-tenant industrial buildings were the most-preferred assets across the country among survey respondents,” Wright said.

“In fact, for every one respondent who would be a seller of an Ottawa single- or multi-tenant industrial asset, there were 19 respondents who would be buyers.”

That places these assets above even those in Vancouver and Calgary (where there were 17 buyers for every one possible seller) and Toronto.

Wright noted with an availability rate of 3.1 per cent, Ottawa’s industrial sector is in line with the national average.

Several major factors contribute to the interest; a lack of available serviced industrial land restricting new supply, the burgeoning e-commerce sector (Amazon is building a million-square-foot fulfillment centre in East Ottawa), an economy buoyed by a growing urban tech sector and federal government growth, and major infrastructure and private-sector developments lined up for the next decade.

This activity has created a hot market, where average industrial net rental rates have increased to just above $10 per square foot, up about 75 cents year-over-year, Wright said.

Across all sectors, Altus found Ottawa ranked third behind Vancouver and Toronto among Canadian cities in investment preferences.

While the city’s slice of Canada’s overall investment volume remained at a rather small three per cent, Johnston said that’s due to a lack of available product rather than a lack of interest from investors.

The city has seen increased investment this year in residential land, industrial and “perhaps surprisingly” in the retail sector, Johnston noted. While investment is down in office and multi-res, “the absolute number of transaction deals is up in both these sectors, just the average transaction size is down.”

In Ottawa’s burgeoning office market, availability has declined for all classes. Altus pegs the overall availability at 10.1 per cent, down from a peak of 13 per cent in Q4 2016. Class-A space in the CBD has been the “single-largest contributor,” falling to 5.6 per cent.

“The decline was started off with movement in the A market, which is more than twice the size of the class-B and -C markets combined,” Wright noted. “Class-A availability peaked first in Q4 2016 at 12.2 per cent and has since improved and come down to the current 8.5 per cent.

“When the class-A market space started to fill up, and remember there is a lot of it, the class-B and -C space kept emptying and lagging by almost a year. Class-B availability peaked in Q3 2017 at 15 per cent and has come down; it’s currently at 11.5 per cent. This was followed, one quarter later, by the class-C space which peaked in Q4 2017 at 21 per cent and is now at 17 per cent.”

Urban tech gets much of the credit, though the federal government is starting to lease new space. She cited companies such as Shopify, SurveyMonkey, Klipfolio and Telesat as key tenants expanding their downtown presence, or moving in.

Even Ottawa’s East sector is starting to see gains, which could accelerate when a new LRT line goes into service in early 2019.

“Two of the most interesting leasing nodes right now are in Ottawa East and Gloucester where availability continues to be high but may have peaked in Q2 2019 at 19.9 per cent,” Wright said. “We’re starting to see some significant leasing activity.

“It’s worthy to note, though, that all of the positive absorbtion to date has been due to demand from the public sector and not the private sector.”

Although that’s nine months old now, “The sense from landlords across the city is that these low levels of vacancy have continued,” he said.

The most pronounced trend is the shift from condo construction to rentals, with about 1,500 rental starts last year, 123 more than for condos.

“Purpose-built rental starts lagged condo starts for years, finally surpassing them in 2016 and really taking off in 2017,” Johnston said.

Johnston said the number of development applications remains high, and Altus expects the trend of rental units outpacing condo starts to continue “over the near term.”

Despite “doom and gloom” headlines, Ottawa’s retail availability remains stable at 6.2 per cent. Johnston said the growing presence of “off-price” retailers such as Winners, Marshalls, HomeSense and Saks off Fifth continues across Canada. Ottawa has also benefited, with Nordstrom Rack recently opening a store at the Trainyards shopping district.

Shopping centres also continue to invest heavily in their food and beverage options.

“An important and rapidly growing segment of the retail market is the food experience,” Johnston observed. “Some in the industry believe the restaurants of today and tomorrow to be the new anchor tenants, and if you visit Ottawa’s enclosed malls you’ll notice a significant amount of capital being invested in support of this theory.”

Finally, he noted there remains “a lot of retail development,” including Minto’s Arcadia shopping centre, Taggart’s Shops of Tenth Line and Trinity Common at CitiGate.

The vacated former Sears store at Carlingwood Shopping Centre is slated for demolition and redevelopment.