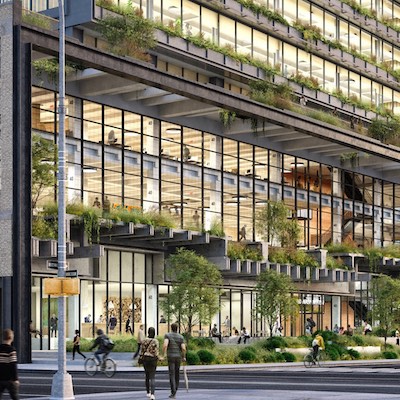 Oxford Properties Group and joint venture partner CPP Investments announced today that Google has exercised its option to purchase the St. John’s Terminal development, which it currently leases, for $2.1 billion (all figures US).

“When we acquired the St. John’s Terminal site in 2017, we saw an incredible opportunity to rethink the modern workplace and bring that vision to New York,” said Dean Shapiro, head of U.S. developments at Oxford Properties, in the announcement. “From Day One of our partnership on the project, it was clear that Oxford and Google’s vision for the future of work were fully aligned.

“Today showcases our deeply shared commitment to the future of the office, and the great city of New York, as we drive innovation and creativity in the heart of NYC.”

Google’s decision to purchase St. John’s Terminal builds on its existing plans to invest more than $250 million this year in its New York campus presence.

“New York’s energy, creativity and world-class talent are what keep us rooted here and why we’re deepening our commitment with plans to purchase St. John’s Terminal,” said Ruth Porat, Alphabet and Google CFO, in the announcement. “We look forward to continuing to grow along with this remarkable, diverse city.”

The St John’s Terminal site was acquired in 2017 by Oxford, the project’s lead developer, and is a joint venture with CPP Investments. The 12-storey, 1.3-million-square-foot St. John’s Terminal site encompasses two city blocks adjacent to Hudson River Park’s Pier 40 and remains under construction.

“St. John’s Terminal gave us the opportunity to design a healthy, high-performance building for Google that will connect Hudson Square to Hudson River Park with new public greenspaces and pathways, honour the industrial history of the area, and serve as a model for the sustainable future of New York City,” said Rick Cook, founding partner of project designer COOKFOX Architects, in the release.

The former freight terminal is being reimagined as a sustainable, adaptable and connected building, with its biophilic design adding numerous outdoor open spaces intended to reconnect the Hudson Square neighbourhood to the waterfront.

The building features massive 100,000 square foot floorplates, ceiling heights of over 15 feet and 440 feet of unobstructed Hudson River views. It will also offer biodynamic lighting, highly filtered outside air, end-of-trip facilities to accommodate commuting by foot or bicycle, sensor-driven real-time smart operations and what the developers say will be among the best digital connectivity in the city.

The building will also offset 100 per cent of its carbon in support of Google’s carbon reduction goals, in addition to pursuing LEED Platinum and ILFI (International Living Future Institute) Zero Carbon certifications.

As part of investing in its long-term campus footprint in New York City, construction is also proceeding at Pier 57 where Google will occupy about 320,000 square feet of office space.

Once completed next year, the site will also include a public food hall, community space, galleries, the city’s largest public rooftop space and educational and environmental programs run by the Hudson River Park Trust.

Google has had a presence in New York for more than 20 years, with 12,000 full-time employees in the state as Google’s largest office outside of California.

The company’s campus investments will provide the capacity to grow its workforce in the city to more than 14,000 in the coming years.

Oxford to acquire $2.8B KKR industrial portfolio in U.S.

Oxford sells One Memorial Drive for $1.05B; largest office sale of 2021