Oxford reveals plan for 60-storey The HUB in Toronto

Oxford Properties has released the first details of its plans for its prime 30 Bay St. property in downtown Toronto. The HUB is proposed as a 1.4 million-square-foot office tower up to 60 storeys high. 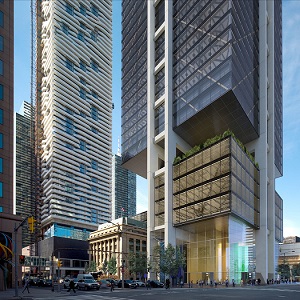 U.K.-based architects Rogers Stirk Harbour + Partners was chosen by Oxford to design the striking new structure. It is named after the tower’s proximity to the Toronto Harbour, the Union Station transportation hub and Bay Street.

Oxford also said the design will incorporate the historic Harbour Commission Building which already stands at the site.

Oxford submitted its rezoning application to the City of Toronto on Friday, seeking permission for a 60-storey building. No other details have yet been released, though Oxford plans to release further information in late March, the company said.

The property was purchased in May 2017 for $96 million by Oxford and the Canada Pension Plan Investment Board (CPPIB), with each owning a 50 per cent stake.

When it announced the sale, former owner PortsToronto said the former Harbour Commission building would be restored and maintained as part of any future development plan.

At that time, Oxford management called the site “an exceptional piece of real estate.”

“Oxford has been enthusiastic about this site since PortsToronto selected us as their redevelopment partner five years ago,” said Michael Turner, Oxford’s Canadian executive vice-president, when the sale was announced.

“This acquisition of 30 Bay Street fits well with our Canadian office portfolio strategy, which focuses on key markets such as Toronto,” added Peter Ballon, managing director, head of real estate investments for CPPIB. “The site’s proximity to a major transportation hub and a growing urban residential area make it an attractive future development site.”

The site is at the corner of Bay and Harbour Streets, just south of the Gardiner Expressway.

The partners plan a major commercial and residential redevelopment on the JV property, which cost $700 million. It covers about 3.25 acres fronting the Hudson River. Oxford owns a 52.5 per cent interest and will manage the development; CPPIB owns the remaining 47.5 per cent.

Oxford is one of the world’s leading real estate investment, development and management companies. Established in 1960, it manages more than $40 billion of real estate assets on behalf of its co-owners and investment partners, with a global portfolio spanning over 60 million square feet.

CPPIB is a professional investment management organization that invests the funds not needed by the Canada Pension Plan (CPP) to pay current benefits on behalf of 20 million contributors and beneficiaries. It invests in public equities, private equities, real estate, infrastructure and fixed income instruments.