Wesgroup Properties’ PacificLink Industrial Park has landed its largest tenant, as Texcan has moved its main distribution centre and consolidated the administrative functions of other sister companies into the Surrey, B.C. space. 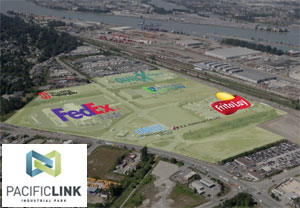 “We’re so land-constrained here, particularly for industrial land, so a lot of industrial areas exist not necessarily because they’re the best locations for industrial, but just because there’s available land there,” said David Wesik, Wesgroup’s vice-president of corporate development. “The difference with us is not only do we have the land, but it’s a central location with great access to highways and infrastructure.”

The master-planned development on the south shore of the Fraser River offers access to Metro Vancouver’s major highway systems, rail networks and the Fraser Surrey Docks.

The first building at the 84-acre industrial park was completed by Wesgroup and occupied in 2007.

“Build-to-suits always take a little bit longer because you’re not just negotiating a lease, you’re designing a building at the same time,” said Wesik. “And you don’t go firm on the lease until you’ve agreed on all components of the design, layout and square footage of the building.”

Texcan is one of Canada’s largest wire and cable distributors. It joins FedEx Freight, Pacific Coast Express, Quik X, Williams Machinery, Lordco Auto Parts and B.A. Robinson as tenants at PacificLink, and it’s expected this latest addition will play a part in bringing more offices to the region’s logistical sites.

There are no stand-alone office structures at PacificLink. And while almost 30 per cent of Texcan’s property is dedicated to offices, the average office space component for other buildings in the development is in the 10 to 15 per cent range.

There are about 16 unused acres remaining at PacificLink on land parcels ranging from three to five acres, and it’s anticipated they’ll be filled within five years.

“The total value of all the completed buildings we currently own at PacificLink is in excess of $100 million,” said Wesik. “The value of the remaining vacant land is about $25 million.”

Of everything completed so far at PacificLink, 85 per cent has been build-to suit.

“We definitely have completed unique buildings for tenants, but there’s only so much specialization you want to do because you have to be thinking long-term if you’re leasing,” said Wesik.

“While you need to give the tenant what it wants and specifically design it for them, as much as you can you want the building to be flexible in case you have to repurpose it in the future for another user.”

More warehousing to be built on spec

Moving forward, Wesgroup expects to build more warehouse space on spec on some of PacificLink’s smaller lots. The next project on tap is a 22,500-square-foot warehouse space being built on spec that will be suitable for either a single user or multiple tenants.

“Given the success we’ve had and the interest we’ve seen from a lot of tenants looking to relocate on a shorter timeline, we feel that there’s a very strong market for smaller bay warehouses,” said Wesik. “If we had inventory either ready to go or nearing completion, we’re confident that we’d have tenants step up.”

Lease rates average around nine dollars per square foot for relatively generic multi-tenant warehouse space at PacificLink, with a premium added for build-to-suit space. Wesik said those prices are at the high end of the spectrum for recently built Surrey industrial space and competitive with what’s found in South Burnaby.

While Wesgroup owns PacificLink, early on it sold one lot to Frito Lay, which constructed its own building.

“There was an openness to sell if it meant we were bringing good brands here, and that helped us absorb some land, but moving forward we’re lease-only,” said Wesik.

Wesgroup works with every municipality in the region and Wesik finds Surrey very business-friendly and said it grants building approvals comparatively quickly. The City of Surrey started offering tax waivers and reduced building permit fees to draw economic investment to the area in 2009 and, while those incentives are no longer available, they’ve helped attract well-paying jobs to PacificLink and other area sites.

“The tax incentives weren’t the reason why we did the deal, but every little bit helps,” said Wesik. “Any benefits that you can pass on to potential tenants help.

“Surrey is a really good place to do business. I wouldn’t say that the market is on fire, but it’s very healthy.”