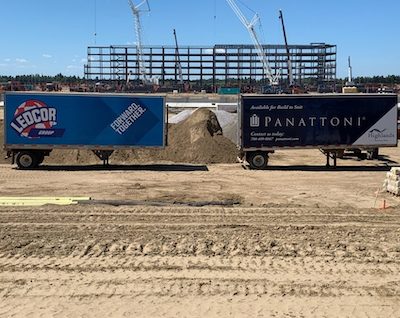 Panattoni Development Co. is building a massive robotic fulfillment centre for Amazon in Parkland County, just outside Edmonton, which will be one of the largest such distribution facilities in Canada when it opens in 2022.

The building has a footprint of over 600,000 square feet, but will comprise five levels giving it an effective storage area of about 2.9 million square feet. Designed to accommodate more than 1,000 full- and part-time workers, it is being built to pick, pack and ship small items such as books, electronics, toys and other consumer items.

In one of several coordinated announcements about the development, Toronto-based Panattoni said the state-of-the-art facility will feature advanced robotic sorting equipment.

Construction is already underway at the site in Panattoni’s 300-acre Highland Business Park in Acheson, part of Parkland County just outside Edmonton’s western border. The Amazon facility will sit on 66 acres of land in the park.

It will be the first facility of its kind in Alberta and one of only a handful of large, multi-level distribution centres in Canada.

“We’re excited to expand our operations and create great, safe careers of the future for talented Albertans starting on Day One,” said Vibhore Arora, the regional director for Amazon Canada, in its announcement.

“Robotics and advanced technologies make our fulfillment centres safer and more collaborative, which is a big part of our mission to become Earth’s safest place to work.”

Amazon is already constructing a similar facility in the community of Barrhaven in the south end of Ottawa. Montreal-based Broccolini is the developer of that multi-level fulfillment centre, which has a similar footprint and is to be more than 2.8 million square feet.

Construction on that facility has been underway since mid-2020 and it is slated to open later this year.

Alberta-based Ledcor Construction is the lead contractor on the Parkland County project, which is providing hundreds of construction jobs during the development phase.

Highlands Business Park is one of the fastest-growing industrial areas in Alberta. Located along major transportation routes, it provides businesses with strong connectivity to trucking routes and the Greater Edmonton labour market.

As is customary with Amazon’s projects across Canada, Panattoni officials said they were not able to provide further details about the development due to confidentiality clauses in their contract.

Panattoni worked closely with Parkland County officials to expedite the pre-development timeline required to achieve its construction schedule. The ability to fast-track distribution centres and other facilities is a key factor for Amazon as it works to build out its network of facilities to meet a fast-growing demand for e-commerce.

“Our strategic location and skilled workforce helped us attract Amazon to Parkland County,” said Laura Swain, the county’s interim chief administrative officer, in a prepared statement. “Their presence is a welcome addition to our growing logistics/distribution eco-system.”

Across Canada, Amazon is currently constructing or completing a number of major projects. In May, it announced five new facilities in Vancouver and British Columbia, including a 450,000-square-foot robotics distribution facility at the Port of Vancouver.

In Quebec, it is developing a 520,000-square-foot facility in Coteau-du-Lac which is to open by the end of this year, joining a recently opened centre in Longueuil. That was also part of a larger announcement which included three smaller last-mile delivery stations across the region.

In the GTA, Amazon is building a million-square-foot fulfillment centre in the Ajax and a second 885,000-square foot-centre in Hamilton, about a half hour west of Toronto. Both are slated to open during 2021.