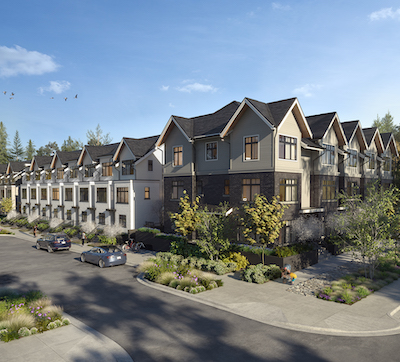 Commercial and industrial developer PC Urban has moved into the Metro Vancouver residential sector in a big way, even taking on the tricky terrain of developing rental apartments.

“We have a good following and track record as it relates to industrial development and employment-generating space,” PC Urban principal Brent Sawchyn told RENX. “Our mantra is changing a little bit now. It’s part of that creative curious gene that underlies everything that PC Urban does. And what we are really catching onto is that we create space for people to work and we also create space for people to live.”

Sawchyn has almost 400 rental apartment units under construction, with another 370 to 400 to come in the next year-and-a-half, in projects in Port Moody and Kelowna.

The company is also constructing its first concrete tower condo development in Vancouver’s West End. The 11-storey building at 1150 Barclay St. will consist of 18 luxury condos and three townhouses.

It’s also adding a rowhouse project to its portfolio, with 23 two- and three-bedroom units on the Capilano River, called Holland Row.

Marketing for the project will begin in April when it completes. Smaller units will be priced at about $1.1 million and larger units at around $1.7 million, which is less expensive than a comparable detached house.

PC Urban has garnered more media attention in the last several years for its development of “stacked industrial” properties, which allows strata title ownership of industrial and office space.

It’s an efficient use of land and it offered an alternative for small to mid-size businesses that would have been otherwise shut out of the pricey Vancouver market.

Sawchyn, who worked for Anthem and Westbank on residential projects prior to PC Urban, acknowledges residential, particularly rental, is a different “side of the cloth.”

Rental housing is not nearly so straightforward as building to sell on the market, particularly when dealing with government policies.

In Port Moody, the company needed to supply five units of affordable housing in the 229-unit apartment building that’s underway, as part of an agreement to offset five mobile home residents displaced by the project.

As well, PC Urban spent about $20,000 per tenant in relocation costs.

The site is 350 metres from the Inlet Centre SkyTrain station. Once the multifamily building is completed in late 2021, it will be sold to Realstar, a Canadian property investment and management company.

PC Urban also has a rental project in the early planning stage in downtown Victoria, with 255 units aimed at seniors and another 20 market rental units above a retail level. 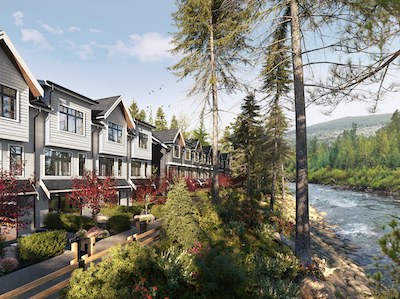 “The returns that are afforded to a developer to deliver-purpose built rental are less than if you build market condominiums. It is a challenge.

“Everyone would like to see and encourage more rental housing in Metro Vancouver and within B.C., but there are more restrictions on rental than market condos. And as a development community, although everyone has their heart in the right place, we don’t get a lot of help.

“When you build a market condominium, the GST is passed onto the purchaser. With rental, we still pay our full complement of development cost charges, CAC (community amenity contribution) charges, and we pay the same taxes.

“And then when the project is finished, we have a cap on (rent increases) put in place by the provincial government, and yet no one is capping the tax increases. If we build market housing, market condos, we have none of (those restrictions). You sell them for whatever the market will bear.”

The case for more rentals

Hardly any rental housing has been built since the 1970s, due to a combination of changes to housing policy and the growing popularity of condos. Many of the rental buildings are therefore old and in need of repair.

With a growing population, a nascent tech industry and less than one per cent vacancy rate, the market for new rental buildings is strong.

There are an estimated 18,000 to 20,000 new jobs on their way to the region, and without more rental supply, city staff are concerned the affordability crisis could grow.

“It’s quite unique and quite different from our experience delivering commercial space and industrial space,” said Sawchyn. “There are not a lot of developers that do both.

“We would love to do more. We feel at PC Urban that we have a social responsibility to deliver more affordable forms of housing to people across the country. (Rental) has become a lost skill in Canada.

“I don’t think we could ever catch up with the number of rental housing that we need to build today . . . with something like 30,000 or 32,000 more units needed in Metro Vancouver, or something like that.

“I don’t even know if we could get the trades to build that. There are a lot of barriers to it, but we like doing it. We enjoy the challenge.”