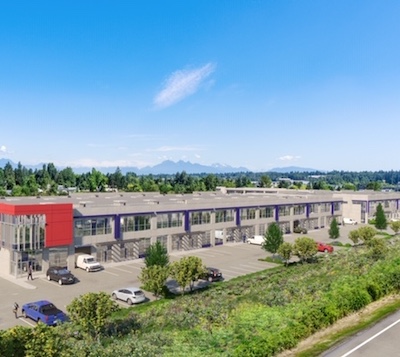 Vancouver-based developer PC Urban says its industrial strata brand IntraUrban has been so successful it is flirting with the idea of turning it into a separate development company.

“I think the following (for IntraUrban) has been so strong that a case could be made for having a standalone development company simply delivering IntraUrban product in major metropolitan centres across North America,” PC Urban CEO Brent Sawchyn told RENX.

The company has just announced its seventh project under the IntraUrban banner. This one is in Surrey, B.C.

Called Crossroads, the two-phase, three-building project will be located on a 10.45-acre vacant lot in Surrey’s Cloverdale area. It will include 185,000 square feet of flexible industrial space fronting Highway 10, near Highway 15. The property is also zoned for office and retail.

The project will include units ranging in size from 2,600 square feet to a freestanding 76,000-square-foot building suitable for a range of industrial owner-users.

Crossroads is the developer’s sixth IntraUrban project either underway or completed, including sites in South and East Vancouver, Burnaby’s Brentwood town centre, Richmond and Kelowna.

Sawchyn said his team is “about to purchase” a property in Edmonton that would be turned into another 100,000-square-foot IntraUrban project. It is also looking at sites on Vancouver Island, he said.

The latest statistics for Surrey show industrial lease rates increased 13.5 per cent over last year and a continued low vacancy rate of 1.3 per cent, said Garth White, a principal with Avison Young in Vancouver, the listing agency for the project.

Strong demand and low supply have pushed industrial strata prices up by 15 per cent, on average, during the past four years.

“The majority of this demand is coming from user groups that historically would have purchased a smaller, freestanding building,” White said. “But, with limited options, businesses are now looking to strata to provide ownership opportunities.”

The asking price for IntraUrban Crossroads ranges from $345-$375 per foot, White said.

“We have a certain niche or strategy that we are playing into, which is delivering under the IntraUrban brands ownership opportunities of industrial space for small- and medium-sized businesses,” he said. “At this point, we’d like to stay true to that theme.”

He said about 80 per cent of IntraUrban buyers are owner-users.

At Crossroads, the buildings will have 26-foot ceiling heights and built-in, upper-floor flex space.

Other IntraUrban developments sold out before construction completion in Vancouver, Richmond and Burnaby.

“The quality of this development complements the growing Cloverdale Town Centre and provides the area with much-needed warehouse space,” said Dean Moore, the president of Cloverdale’s Business Improvement Association, in a release.

“Bolstering the economic sustainability of the area, providing centrally located, employment generating space is more important than ever.”

Sawchyn said the industrial market continues to be stoked by strong trade activity through the Port of Vancouver and limited overall supply.

Even with U.S. recession talk heating up in recent weeks, Sawchyn said PC Urban likes the medium- and long-term prospects for the region in terms of industrial demand.