Plaza Retail REIT’s focus on grocery- and needs-based retail has provided a strong base for the t... 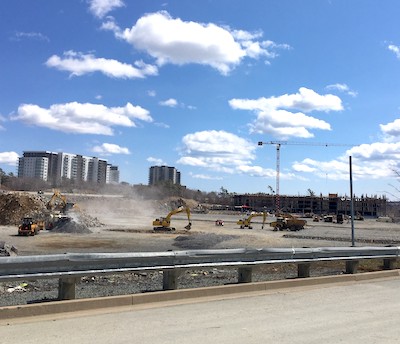 Plaza Retail REIT’s focus on grocery- and needs-based retail has provided a strong base for the trust during the COVID-19 crisis. The resilience of its strategy has even allowed the REIT to launch a new, grocery-anchored Halifax development.

The new centre, being built on a piece of recently acquired raw land on Hogan Court in the West Bedford area, will be anchored by a 40,000-square-foot Atlantic Superstore and include another 20,000 square feet of essential-needs and convenience-oriented retail offerings.

“Halifax is a growing market that obviously motivated Loblaws and us to move forward with a new development,” Plaza chief executive officer Michael Zakuta told RENX. “Like a lot of Atlantic Canada, it’s often underestimated.

“But it’s certainly benefited from growth through inter-provincial migration or Atlantic Canadian migration and immigration. Halifax has been a good story for some time.”

None of the other tenants at the centre have been confirmed.

The site, immediately off Highway 102, is in one of the fastest growing areas in Halifax. It’s surrounded by newly developed medium- and high-density residential neighbourhoods as well as hotel, retail and institutional operations.

The first retailers at Plaza’s new Halifax centre are projected to open next spring.

Plaza (PLZ-UN-T) is a Fredericton-headquartered open-ended REIT and retail property owner and developer focused on Ontario, Quebec and Atlantic Canada.

Plaza’s portfolio at the end of Q1 2020 included interests in 272 properties totalling approximately 8.4 million square feet and additional land held for development. It had a 98.3 per cent occupancy rate.

Two-thirds of the businesses at its properties kept operating through the early stages of the COVID-19 pandemic.

“That’s a good place to be,” said Zakuta. “The enclosed mall world is a very tough place to be right now.”

Outside of a few movie theatres and fitness centres, all of Plaza’s tenants are now open.

Zakuta said June rent collections were “much better” than April and May.

The REIT has done a number of rent deferral deals with tenants and is participating in the Canada Emergency Commercial Rent Assistance program, which provides relief for small businesses experiencing financial hardship due to COVID-19.

Retail REITs were hit hard by business shutdowns imposed by governments in March to try to curb the spread of COVID-19 and Plaza was no exception.

“It’s getting better and people will realize that we have a solid business and that we didn’t lose a third of our business overnight,” said Zakuta of Plaza’s stock price. “People are very negative about retail, but we believe there’s a future in retail.

“Obviously you have to be careful in what you do, and how you do it, but we’ve always done the basic essential-needs stuff since the beginning — a lot of it just because of our geography more than anything else.

“That’s where we have a chance to grow with that type of tenant mix as opposed to the enclosed mall, which has always been very fashion-oriented. That’s not where we are.”

Zakuta believes Plaza is well-positioned for future growth, though the pandemic has largely frozen the market for acquisitions over the past four months.

“We have a good pipeline of deals that we’re working hard to execute on,” he said. “The phone is ringing, but I don’t think we’re going to see a lot of transactions in the short term.”

The economic slowdown has also put a hold on any potential property sales by Plaza.

The company formerly known as Plazacorp acquired KEYreit’s 1.2-million-square-foot portfolio of 227 properties in nine provinces in 2013. It received court approval to convert to a REIT later that year.

“We have regular dispositions of non-core stuff where highest-and-best use is not retail,” said Zakuta. “We have that ongoing and that all comes out of the KEYreit acquisition that we made. We’re still selling some of that product.”

Zakuta said Plaza has a “pretty solid” development pipeline. He expects to make further announcements on that front in August.

“We’ve had to slow down to regroup, but we’re committed to a number of developments and redevelopments. We have construction underway in a number of locations, including Halifax, and there’s more to come.”