Podium Developments has completed 16 urban infill projects in Ontario and it’s busier than ever w...

Podium Developments has completed 16 urban infill projects in Ontario and it’s busier than ever with several more on the go at various stages. 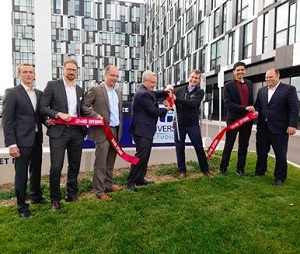 “Podium Developments was founded in 2004 after an identification of a gap in the development, construction and management of purpose-built student housing,” said managing director Bernard Luttmer. “Since that time, Podium has added the development and construction of market housing, including condominiums.”

Luttmer is one of three founding partners of Podium, along with former Queen’s University schoolmates Oskar Johansson and A.J. Kielty. The trio were members of the top-rated Queen’s sailing team in the 1990s and roomed together in a house on William Street in Kingston.

Johansson is now also a managing director of Podium, while Kielty is the president and chief executive officer of Varsity Properties — which has an interest in Podium’s latest completion in Oshawa.

Podium was originally based in Kingston, but has since moved to Toronto and undertaken developments in the Greater Toronto Area, Kingston, Barrie and Guelph. It’s also now involved in Miami.

“Podium develops around an opportunity, whether it’s a gap in the market, good land value or the repositioning of an asset,” said Luttmer. “There is no formulaic response.

“A context-appropriate solution that delivers great value for all stakeholders is our primary target. We gravitate to infill developments located around institutions or mixed-uses, generally with some access to transit.”

Podium and Building Capital’s University Studios mixed-use student condominium just opened in Oshawa, where the developer has another project down the street at 1569 Simcoe St. N.

“We purchased a failed student housing project and have converted it to a 125-freehold townhouse project with approximately four acres of private green space amenity that will back on to the Oshawa Creek,” said Luttmer. “It is called Ironwood of North Oshawa and is going to market as we speak. We hope to start occupying units in summer 2020.”

The release date for Ironwood is Nov. 2.

The 11-storey buildings, designed by Toronto’s Teeple Architects, will offer approximately 400 units and 16,662 square feet of commercial space. Construction is expected to start in the spring, with occupancy to follow in the fall of 2020 for the first building and a year later for the second.

Another development near Queen’s, 575 Princess, required the consolidation of an entire city block. The 10-storey building will have approximately 358 units, 565 bedrooms and 8,826 square feet of street-related commercial space. Construction is anticipated to start in the fall of 2020, with occupancy two years later.

Podium’s 80 Dale Avenue development will be on a 4.5-acre site adjacent to the Guildwood GO Transit station in the Toronto suburb of Scarborough.

“We are proposing approximately 386 units and 300,000 square feet of gross floor area, spread out in four stacked townhouse blocks and one 27-storey residential tower,” said Luttmer.

“The proposal was approved under the city’s Open Door Affordable Housing Program in summer 2018 and includes all units as affordable or mid-range affordable. The proposal also includes the introduction of a new private roadway, amenity space and a proposed link to the Guildwood GO train.”

The Arquitectonica-designed Miami project, University Bridge Residences Miami, is in the Sweetwater area at the gates of Florida International University (FIU).

“The building takes up an entire superblock and is the result of the consolidation of over 50 individual townhouses,” said Luttmer.

University Bridge will be built in two phases, with the first comprised of a 20-storey building with 886 units, 1,244 bedrooms and more than 60,000 square feet of inside and outside amenity space, along with approximately 7,000 square feet of commercial space and 648 parking spots. The first phase is under construction and occupancy is projected for September 2020.

The second phase will be another 20-storey building which will include 312 units, 1,098 bedrooms, approximately 6,000 square feet of commercial space and 605 parking spots.

Luttmer said Podium learned about the Miami site and a local partner through a mutual Toronto contact. FIU has 54,000 students and Luttmer said it has “a large expansion of students underway, without the additional housing supplied yet.” This presents a “terrific opportunity” for his company’s development.

Podium is open to doing more development outside of Ontario if the right situations present themselves, according to Luttmer.

“Working outside of a local area carries its own challenges, as the entitlements, construction trade base and political climate are all different and challenging to navigate. But with challenges come unique opportunities, ones that we feel we are uniquely set up to handle.”

Luttmer said Podium has two other development sites in its pipeline which it can’t yet make public.