During 2013 venture investors sank $650 million into property technology, but that number balloon...

During 2013 venture investors sank $650 million into property technology, but that number ballooned to $2.2 billion in September alone, according to MetaProp NYC partner Zak Schwarzman. 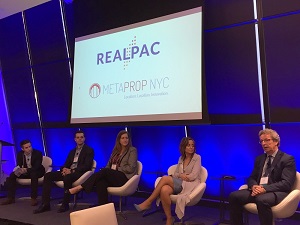 PropTech has obviously become a growing factor in an industry that’s been accused in the past of being slow to change and adopt new technology. The advent of tech-driven smart buildings, which can create ecosystems to propel connectivity and smarter cities, has become a hot topic.

A panel of executives involved in PropTech came together to discuss its promise and the information it can generate at a recent event co-hosted by REALPAC and MetaProp NYC at Toronto Region Board of Trade’s Lennox Hall.

What proptech can offer real estate

Technology can provide greater efficiency, safety and comfort in buildings while delivering cost savings aligned with the goals of property owners, managers and tenants.

“It’s about leveraging all of the information not only from the building itself, but also from the participants within that building, whether it’s the tenants or visitors,” said Diane Vrkic, co-founder and chief executive officer of Waypoint, a centralized commercial real estate platform for maximizing asset, operational and team performance.

“We’ll have more of this information that, I believe, will help us make better acquisition decisions and underwrite our assets better because we’ll have a better understanding of what the market information is for a particular building. It will enable us to make better asset management decisions in regard to where we should invest the money into improvements in the space.”

Connell McGill is the co-founder and CEO of Enertiv, which uses real-time data to deliver insights and a building monitoring system for commercial real estate portfolios. He’s excited about energy benchmarking which enables people to see how buildings compare to each other, and said it will evolve further over the next two or three years.

“You will be able to see how each piece of equipment or each critical asset that makes up your building’s infrastructure is performing compared to your direct competitors in a specific geography,” McGill explained.

“That’s not only going to help you focus your capital investments to fine-tune your operation, it will also influence the technologies that you’re adopting and the return you can expect from those investments.”

For these benefits to fully materialize, however, some things need to change or improve.

A bigger role for IT

Casey Witkowicz is the founder, president and CEO of RYCOM Corporation, which develops innovative and integrated technology solutions for governments as well as the real estate, financial, media and retail sectors. He believes current procurement processes inhibit innovation because those involved don’t properly understand PropTech.

Vrkic agreed and said information technology (IT) teams should be more involved in making decisions about acquiring and adopting new technology. It shouldn’t be totally left up to senior executives who have little familiarity with what they’re pursuing.

While Vrkic is pleased that real estate companies are increasing investments in PropTech to stay up on new trends, more than funding is needed. She said companies should also hire directors of innovation who understand the firm’s technology strategy and can open people’s minds to the way value can be created within a portfolio or investment strategy.

A different kind of expertise is also needed in building management, as the role is changing.

McGill said technology applications from companies such as Enertiv are being used by operators who might not be educated in analytics or data science. Thus, they aren’t getting the full potential out of these new tools.

“As well as trying to build a platform for tomorrow’s operators, we’re having to bridge that gap,” McGill said. “We’re doing more and more hands-on work internally to develop a client success team to ensure that the on-site teams know how to use this technology and make the most of it, and that we’re delivering on our promise to management.”

Maria Aiello, Manulife’s global head of private markets and real estate technology, doesn’t believe there’s always a consistent approach to cyber security within the real estate industry and thinks it should be a bigger priority for senior management.

Responses to cyber security issues need to be quick and decisive, and Witkowicz said IT departments should be brought in to assist in asset operations and management for cyber security purposes.

“The integrity and trust that’s lost in a security invasion of some sort is problematic,” he noted. “Whatever we’re doing is not enough.”