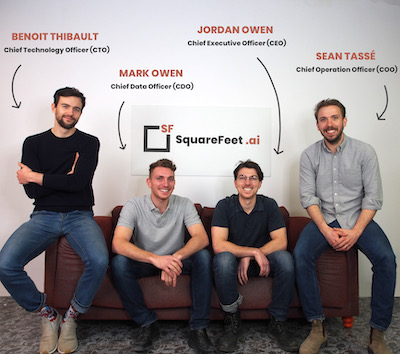 “We didn’t know the extent of how inefficient (pricing) really was until we started speaking with clients,” he said.

Owen said some developers try to create their own algorithms to price units in their properties, but they’re far from optimal given that real estate people are not experts in data science. “Having a product like ours that does it all automatically is a huge value-add.”

Owen and his brother, SquareFeet.ai co-founder Mark Owen, have “been talking about real estate forever,” given that they grew up in the family real estate development firm Mondev.

Jordan Owen also previously worked as a commercial and industrial broker at Colliers in Montreal: “I was doing mostly cold-calling, so I learned how to sell.”

He then went on to work for the family business Mondev, where he worked on deals from start to finish. Brother Mark Owen also worked at Mondev and in investment banking.

“I wanted to find ways to increase the efficiency and overall pricing that a project could get, so I started to dive into data analytics and understanding how to price effectively,” he said. “I really fell in love with the ability to systematize pricing using big data and quantifying qualitative attributes.”

From Bien Aller to Squarefeet.ai

When the pandemic was declared last March, Owen was doing a dual degree in real estate development and city planning at Massachusetts Institute of Technology (MIT). He returned to Montreal after in-person classes were cancelled.

Shortly after, he and his brother along with Sean Tassé, a real estate lawyer who worked in construction management, started a reusable face mask business. They called it Bien Aller, after the phrase “Ça va bien aller” (things will be OK), which became popular in Quebec in the early days of the pandemic.

In June, the three Bien Aller co-founders took some proceeds from mask sales to launch SquareFeet.ai and added Benoit Thibault, who has a computer science background, as a co-founder.

“We decided to focus our energies on what we’re all really experts at, which is real estate and tech.”

Meanwhile, given that face masks are now “worth very little,” Bien Aller is being repositioned to sell T-shirts, hats, socks and more “so that in a year, when we try to sell it, it’s actually worth something,” he said.

The early growth of Squarefeet.ai

SquareFeet.ai has 10 to 15 clients, mostly in Montreal, including developers Kodem, RoseFellow, Armco and Mondev. The company also has clients in Toronto and recently picked up its first Nova Scotia client.

Owen said developers and brokers who establish the pricing for new condos and rental often make the mistake of setting the same square foot price per unit, no matter its quality. As a result, “you end up renting or selling all of your most beautiful units first and then you’re left with the ones that were mispriced because they were too expensive.”

The initial price list SquareFeet.ai provides to clients is based on market comparables and includes data such as population density, income distribution, age distribution and public listings. The location and design attributes of each unit are also quantified.

For example, SquareFeet recently completed reports for a client for a development in Griffintown, near downtown Montreal, and another in Lachenaie, off the eastern tip of the island of Montreal.

In Griffintown, the product found the optimal size for a one-bedroom was between 500 and 600 square feet while in Lachenaie, it was 800 square feet. “It’s data-driven decisions that we’re giving our clients.”

SquareFeet.ai’s model creates a form of dynamic pricing for real estate akin to the system used by airlines. When there is increased demand for a specific type of unit – such as studios selling faster than one-bedrooms – pricing is increased to take into account that increased demand.

As part of its sales efforts, SquareFeet.ai has been asking potential clients to provide sale dates and prices of previous projects. It then provides them reports to show how SquareFeet.ai would have priced their units at launch and during the last year of sales.

“In our calculation, there’s about $1 million left on the table from this mispricing. Having this sort of tool would save a lot of energy for the developer.”

SquareFeet.ai is now developing a product for existing homes Owen believes could tap a larger market than its existing product for new condos and rentals. It could be launched by the end of summer.

Proptech strategy is as important as the tech itself

Steve McLean Commercial Market Reports National Feb. 9 2021
D
Danny Kucharsky Business reporter
Danny is a multiple award-winning journalist based in Montreal, who has written for about 75 magazines and newspapers in Canada and the U.S. His credits include The Globe and Mail, Montreal Gazette, Maclean's, Chicago Tribune and a wide variety of business, specialized trade and medical magazines. Danny was also the Montreal correspondent for Marketing Magazine for several years.