Sales launched in September and are going well for the Festival condominium by QuadReal and Menke... 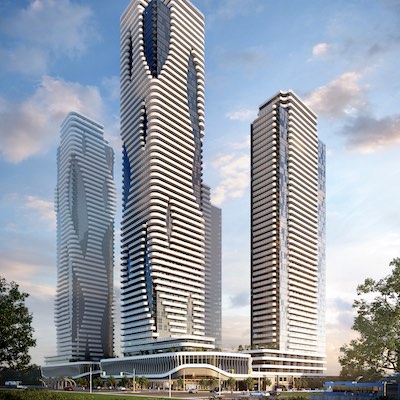 An artist’s rendering of the Festival condos property, which will be constructed by QuadReal and Menkes at the Vaughan Metropolitan Centre. (Courtesy Menkes)

Sales launched in September and are going well for the Festival condominium by QuadReal and Menkes, the second component of their ambitious plan for the Vaughan Metropolitan Centre (VMC).

QuadReal owns 84 acres on the site, part of a massive development involving several other companies aimed at creating a downtown hub in what was formerly thought of as a bedroom community just north of Toronto.

“The governments in the 905 (area code) municipalities have been paving the way for growth to their city centres, Mississauga and Vaughan especially,” Menkes executive vice-president of high-rise residential Jared Menkes told RENX. “QuadReal came to us with this opportunity and we were very interested.”

The first VMC development the two companies partnered on was Mobilio, which launched last year. It features 18-, 15- and 13-storey condo buildings and townhomes that will have approximately 1,100 units when they’re ready for occupancy in 2022.

“One of the things we’ve always done as a company is taken positions in neighbourhoods,” Menkes said of the family-owned firm that’s been in business for 65 years. “That goes for all of our asset classes.”

The next QuadReal-Menkes collaborative project in VMC is the first phase of Festival, comprised of 59- and 48-storey towers with a combined 1,300 units. IBI Group is responsible for the architecture of the buildings and the landscaping, while Cecconi Simone is overseeing interior design.

Construction is expected to start next spring and it’s estimated it will take four years until occupancy can begin. Two more condo towers will be launched next year.

Festival amenities will include: music and art rooms; a sun lounge; an oasis pool; a party room with chef’s kitchen; a social club; a multimedia lounge; a sports bar; a children’s play room; a barbecue area with fire pits; and an outdoor dog area.

Festival will be located within easy walking distance of a mobility hub offering public subway and bus transportation via the Toronto Transit Commission, York Region Transit, GO Transit and Züm.

Three blocks will be developed by QuadReal and Menkes over the next several years along a north-south corridor that will eventually have nine condo towers, a grocery store, a fitness centre, shops, cafes, restaurants, entertainment venues and office space. Things will culminate at the end of the promenade with a cultural centre and outdoor stage as well as a school.

There will be access to more than 430,000 square feet of retail space, 45 acres of park and public space, and 17 kilometres of trails and bicycle lanes in the southern part of VMC by the time everything is built.

There are several other buildings from other developers either already occupied or under construction in VMC.

The first four towers of Cortel Group’s Expo City, VMC’s first residential community, are occupied. Those 1,565 units will be joined by another 554 in the 60-storey CG Tower, the fifth and final piece of the development with a target occupancy of late 2021.

SmartCentres and CentreCourt Developments partnered on the first three 55-storey towers in the Transit City condo complex – which also includes 11 townhomes – to house approximately 3,500 people. The project, which was also slated to include a Buca restaurant, is nearing completion and occupancy.

The two developers have also started construction on 45- and 50-storey condo towers to complete Transit City. Their 1,472 units are substantially sold.

The MET is a 35-storey condo with 510 units, including 62 townhouses, that’s nearing occupancy. The Plazacorp and Berkeley Developments project is sold-out.

Menkes has 3,500 residential units under construction in the Greater Toronto Area. Another 6,200 will start construction in 2021 and 2022, and a further 10,000 are going through the planning approvals process.

Menkes said his company will develop almost six million square feet of space on Toronto’s waterfront in the next eight years.

“Our commercial side is getting ready to deliver 100 Queens Quay East, which is the office building that’s part of our LCBO and Sugar Wharf development,” said Menkes.

“We have the Waterfront Innovation Centre, which is waterfront offices, which is so cool for a city like Toronto that has really not appreciated our waterfront for so many years.”

COVID-19 has caused a downturn in the downtown Toronto apartment and office markets. Menkes attributes this in part  to the absence of most of the 120,000 university and college students and 500,000 financial core office workers who would be in the core, due to pandemic-related restrictions.

While Menkes believes people will return to downtown apartments, condos and offices, he doesn’t see a recovery until September 2021 at the earliest.

People will always want to live in downtown Toronto because of what it has to offer during normal times, according to Menkes. He thinks most residents who are accustomed to condo living are still generally happy and taking precautions to avoid contracting the coronavirus.

“We manage our buildings as well, both commercial and residential, as long as the boards keep us there for, and we’re trying to get ahead of everything by putting in the right protocols and staying ahead of the curve wherever we can,” said Menkes.

While there are current concerns with high-density living and elevators in high-rise towers, Menkes said his company treats vertical transportation in buildings the same way as roads in low-rise communities.

“We over-elevator our buildings already, across the board. A lot of developers don’t because it hits the bottom line, because you’re giving up that shaft space all the way up 50 storeys. We like to over-deliver on our product.”