Canada’s second-largest indoor amusement park in a shopping centre is getting a $52-million makeo...

Canada’s second-largest indoor amusement park in a shopping centre is getting a $52-million makeover. 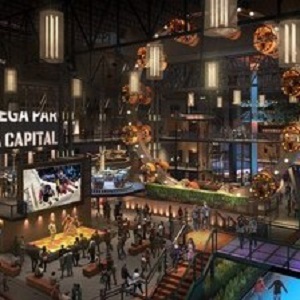 Built in 1988, the Mega Parc in Quebec City’s Les Galeries de la Capitale needs an update, says Jean Pelletier, manager of the Mega Parc.  It’s second in size in Canada to the West Edmonton Mall and is marketed as the largest mall amusement park in Eastern Canada.

“Amusement is becoming a major trend in malls,” says Pelletier. “Oxford views the Mega Parc as a competitive advantage and decided to invest in it. There’s a fit with the mall and the Mega Parc.”

The mall has received about $200 million in investments in the last few years, including the new Mega Parc, renovations of common areas, modernization of the Espace Gourmet dining area, a new Simons department store and a number of other new stores.

During the past year retailers such as Sephora, Mountain Equipment Co-op and Urban Planet have opened, and The Bay got a major facelift. In the coming months, the mall will welcome MAC Cosmetics, Clarks, Jean-Paul Fortin, Michael Kors, and L’Occitane.

The Mega Parc currently gets about 420,000 visitors annually, about 20 per cent of whom are tourists, but Pelletier forecasts a 50 per cent increase in clientele when it reopens. “We expect it to be very popular. We’re going to attack the market in a more aggressive fashion.”

Pelletier says the amusement park is “one of the major indoor attractions in the Quebec City region. Families have shopping, restaurant and entertainment choices with the Mega Parc which makes Les Galeries de la Capitale all-together a family destination. So the Mega Parc plays an important role in overall traffic.”

Work begins after Labour Day to upgrade the Mega Parc and the goal is to reopen by Christmas 2018, Pelletier says.

During the renovation, a temporary park will be installed with attractions that are not currently available, such as virtual reality rides.

In the fantasy world called Steampunk, visitors will travel back to a 19th-century “retro-futuristic industrial environment” complete with steam-powered machines, factories, and steel, wood, brick and cement.

“It also allows us to project into the future,” Pelletier says of the theme. “It’s time exploration; it’s Jules Verne with his futuristic submarine.”

The Mega Parc will have 18 attractions, of which four or five will be popular holdovers from the existing amusement park, like the roller-coaster and merry-go-round. They will be renovated to match the new theme.

Among the attractions will be the first spokeless Ferris wheel in North America and a freefall ride that will be twice as high as the current attraction.

The new park will also have the longest indoor skating trail in Canada – 230 metres – replacing the existing skating rink. It will be lit with LED lights and effects making it possible to change colours by season or event, such as orange for Halloween or pink for cancer awareness.

“It makes the Parc much more dynamic and integrated into the daily lives of the Quebec City community,” Pelletier says. “We’re going to greatly improve the skating experience.”

The middle of the park will have a stage for shows and an interactive fountain with water jets, sound and light features. There will be three new rooms set up for kids’ birthdays or corporate events. Also promised are an interactive floor, light and sound effects and a giant screen.

An unlimited use day pass for one person at Mega Parc currently costs $30 ($15 at night) plus taxes. Family day passes for four people cost $70 plus tax for unlimited use. Visitors can also pay for rides a la carte.