On one hand, partnering with a Fengate Asset Management fund on two mid-rise apartment and retail... 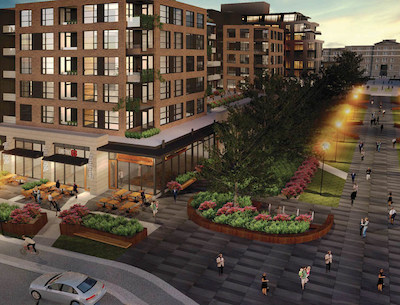 An artist’s rendering of the two apartment and retail buildings at one entrance to Greystone Village in Ottawa. Regional Group will partner with Fengate Asset Management to build the apartment towers. (Courtesy Regional Group)

On one hand, partnering with a Fengate Asset Management fund on two mid-rise apartment and retail buildings at the edge of downtown Ottawa is a significant step forward for Ottawa-based Regional Group of Companies.

On the other, Regional Group chief operating officer Dave Wallace calls it a completely natural next step.

“This is something we have been working toward for all of our 60 years,” Wallace told RENX during an interview Thursday at the Ottawa Real Estate Forum. “This was a deliberate strategy for us to work with an institutional investor.

“The reality is that our family office partners are private, discrete. They are multi-generational investors and they are institutional in scale. They are just not public institutions like a pension fund, a life insurance company or a group like that.”

Thus, the partnerships aren’t announced publicly in the way the Regional/Fengate venture has been.

“The relationship with Fengate was a deliberate effort on our part to bring new capital that we can work with, that has the same vision, purpose, values, the same alignment in terms of strategic goals, that has the same capacity we do to execute.”

The two new rental buildings are part of Regional’s larger Ottawa Greystone Village project. The buildings are designed as six- and nine-storey purpose-built rentals with ground-floor retail, at one entrance to the Greystone site. In total, they’ll contain 245 units of various sizes and configurations.

Fengate will manage the joint venture on behalf of the LiUNA Central and Eastern Canada Pension Fund.

“We are very pleased to partner with Regional Group, such an innovative, forward-thinking and highly experienced partner, on developing much-needed, purpose-built rental apartments in Ottawa-Gatineau,” said Jaime McKenna, managing director and group head of real estate for Fengate, in announcing the venture. “Greystone Village is a unique and visionary community for the region and we are pleased to be a part of this important development.”

The investment marks the first venture into the Ottawa market for Fengate.

$5B pipeline of development

Wallace said Regional Group began actively seeking institutional-type investors more than a year ago. Regional has a significant land bank and varied development pipeline “north of $5 billion” comprised of potential residential, commercial, retail and some industrial in Ontario and Quebec.

“We wanted to have that new opportunity to do business with a company that had that capacity to develop with us without any constraints, no capital constraints,” Wallace explained. “We carved off pieces of multi-family development, commercial development, raw land that could be entitled and a variety of other assets and we took those to market.

“Fundamentally, we ended up (meeting potential investors) in Toronto . . . a little bit in Vancouver but mostly in Toronto.

“We ended up with good institutional interest.”

In the end, those discussions began to focus on Fengate.

“For us Fengate was an easy, natural fit. They are a Deloitte best-managed company, we are a Deloitte best-managed company. We know what that means to achieve that award,” Wallace said. “We shared a lot of similarities in the notion you should be able to do a deal over a handshake and your integrity carries the freight. The documents are part of the deal, but at the end of the day it is the person on the other end of the handshake.

“We also had an alignment in the realistic expectations of the investment returns. No one was expecting home runs, hit-it-out-of-the-park, grand slams kind of stuff. Everyone was very grounded in their expectations.”

Greystone drew the most interest among potential investors and there were many reasons. Much of it relates to the location, near the downtown between the Rideau Canal and the nearby Rideau River.

“Waterfront? Fabulous. Connectivity to transit? Fantastic. An older, mature neighbourhood, an infill site. A heritage element and it was entitled,” Wallace said, ticking off the items on his list.

It does still face one development hurdle regarding the two apartment buildings. Regional applied for, and received approval to add three storeys and 45 units to one of the so-called Oblats and Main buildings (they were originally proposed as twin, six-storey buildings).

However, a community group is appealing that decision to the Local Planning Appeal Tribunal.

Wallace said in exchange for the additional height, Regional has offered a portion of residential land for a community gymnasium. It’s also in negotiations to sell a former monastery at the heart of the development site to the local French Catholic school board and the city for conversion to a school and community centre.

“We took two pieces of the project that were going to be sold and generate profit, and we basically eliminated that profit from our portfolio,” Wallace said, noting Regional will sell “at our cost.”

Greystone Village is a 26-acre site on which Regional has already built single-family and two mid-rise condominium towers. A third condominium tower, with about 85 units, is planned after the apartment buildings are constructed.

At full build-out, the decade-long project would see a total of about 1,000 housing units, retail and commercial spaces, parks and (possibly) the school and community facilities.

Wallace said there has been ““really good interest in the housing, all of it, whether it is sale or rent.”

Site work is already underway for the fully approved six-storey Oblats and Main building, and Wallace said Regional expects to have its building permit within a month. It’s scheduled for completion in 2020.

The second building, pending the outcome of the LPAT appeal and the market, could see construction begin next year.

Regional Group was established in Ottawa in 1958. Today, the company has evolved into a real estate platform with extensive experience handling every aspect of the real estate environment.

Established in 1972, LPFCEC is one of the fastest-growing multi-employer pension funds across Canada, voted among the top 10 pension funds by Benefits Canada. It owns a diverse investment portfolio and $8 billion in assets.

Fengate is a major alternative investment manager focused on real estate, infrastructure, and private equity strategies. With offices in Toronto, Houston, Vancouver, New York, and Oakville, Fengate is one of the most active real asset investors in North America.

Fengate leverages more than 45 years of experience to invest in long-life, high-quality assets and businesses on behalf of its clients.