RioCan Living will launch sales of Verge Condos, its first condominium project without a developm... 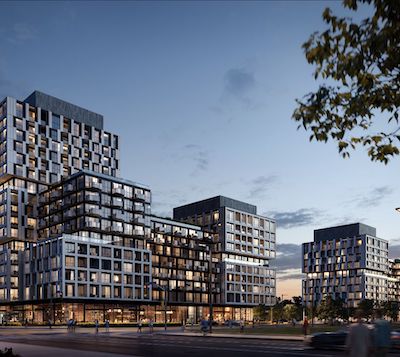 RioCan Living will launch sales of Verge Condos, its first condominium project without a development partner, in Toronto in August.

RioCan acquired the site at the southwest corner of The Queensway and Islington Avenue in Etobicoke in 2010 to add to its retail portfolio, as it included a 100,000-square-foot Cineplex movie theatre, three restaurants and a bank branch. The Cineplex land was acquired by a former partner, so RioCan was left with a 25,000-square-foot plot to intensify.

“It also came with the benefit of the leases for the three restaurants and the bank having very limited lease term left,” RioCan senior vice-president of asset management John Ballantyne told RENX. “One of the toughest parts of converting retail properties into residential through intensifying them is freeing up the leases. This one had it already built in.”

The mixed-use project will include 545 units in 17- and 11-storey buildings, a podium with 30,000 square feet of retail space, a public park and a new service road on the south side of the property.

Unnamed institutional investment partners RioCan has done business with in the past have an 80 per cent financial stake in Verge. RioCan has retained a 20 per cent ownership interest along with project oversight as general partner and sole development manager.

It’s about equidistant to downtown Toronto and downtown Mississauga, has retail close by and is a relatively short drive to Toronto Pearson Airport and Humber College.

Turner Fleischer is Verge’s architect and DesignAgency is overseeing the interior spaces.

“We’re going to have integrated smart living throughout the buildings,” said Ballantyne. “Everything is going to be app-based, be it communicating with management or other residents within the building, booking amenity spaces, managing deliveries of parcels, access into the building and thermostats.

“The whole nine yards is going to be fully automated.”

There will also be a focus on creative work-from-home spaces, including: home offices; meeting rooms; soundproof phone booths; a video-ready content studio with pull-down backdrops and green screens; and an audio recording studio for podcasts and other presentations.

Verge’s other amenities will include: full concierge service; a fitness centre; a yoga/meditation studio; a pet spa; a party room; a cocktail lounge; an outdoor terrace with barbecues, chess and shuffleboard games; and an outdoor lounge offering south-facing views.

If sales go as well as anticipated, construction should start in the second half of 2022 with occupancy in Q1 2025.

RioCan Living was launched in 2018 to deliver purpose-built rental apartments and condos while leveraging RioCan’s more than 200 major market retail and mixed-use properties. The RioCan Living portfolio has grown to more than 2,000 units in seven completed rental residential and condo developments.

It was decided to go the condo route with Verge as part of a capital allocation strategy.

“We’d love to build all of it as purpose-built rental, but the reality is that you need to fund that development through condo development as well,” said Ballantyne.

There’s less condo development activity in Etobicoke than in neighbouring Toronto and Mississauga, according to Ballantyne, which also played a role in the decision.

Ballantyne expects RioCan Living to have about 10,000 residential units built by 2023.

“With the pandemic it has been a bit more difficult, both with the complexities of building in a pandemic as well as with costs going up,” he said. “But, we’re very excited about what we’re going to complete over the next few years.”

Queen & Ashbridge’s 367 condo units at the corner of Queen Street East and Coxwell Avenue in Toronto, a partnership with Context, are 90 per cent sold. Construction will start later this year and occupancy is expected in November 2024.

Metropia and Capital Developments are partners on 11YV, which is under construction at 11 Yorkville Ave. in Toronto. Ninety-eight per cent of its 578 units are sold. May 2024 occupancy is being targeted.

Strada, an eight-storey, 61-unit purpose-built rental at College Street and Manning Avenue in Toronto, will come online later this year.

RioCan and Woodbourne’s 592 purpose-built rental units at the 46-storey Four Fifty The Well, at Spadina Avenue and Front Street West in Toronto, are scheduled for completion in 2023.

The 503 units in U.C. Tower and the 153 units in U.C. Towns, a partnership with Tribute Communities at the Windfield Farms site in Oshawa, are sold out. The townhomes should be ready for occupancy later this year while the tower is targeting May 2022 for move-in.

“We’re about to launch a second set of tower products that will just be shy of 1,000 units over two towers,” said Ballantyne. “That has been an extremely strong project and RioCan continues to build a retail component all around it.”

Latitude at Frontier, a 20-storey, 209-unit purpose-built rental in the Gloucester section of Ottawa near Ogilvie Road and Highway 174, is about to come online. It’s a partnership with Killam Apartment REIT.

Rhythm, a 24-storey, 213-unit purpose-built rental near Carling Avenue and Merivale Road in Ottawa that’s half-owned by Woodbourne, will come online in 2022.

So will Luma, a nine-storey, 168-unit purpose-built rental near St. Laurent Boulevard and Smyth Road in the same city that has Killam as a partner.

Steve McLean Residential Development Toronto / GTA Jul. 14 2021
Steve McLean Business reporter
Steve is a veteran writer, reporter, editor and communications specialist whose work has appeared in a wide variety of print and online outlets. He’s the author of the book Hot Canadian Bands and has taught reporting to college students. He is based in Toronto.