Edenshaw Developments has launched sales for its new Mississauga condominium, Alba, near the city... 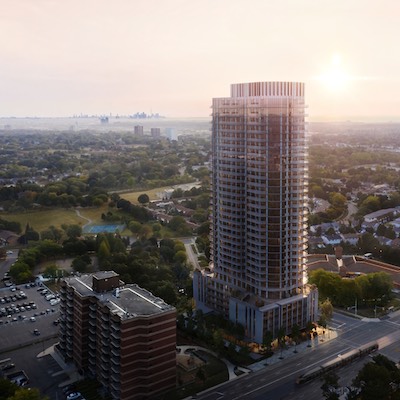 There continues to be plenty of condo and multifamily growth in central Mississauga, which is located just west of the City of Toronto.

“We think demand will stay constant. There’s a strong employment base in the City of Mississauga,” Gerasolo said. “More people are travelling into Mississauga for work than there are people from Mississauga leaving the city for work. I think we have a less transient employment base.

A bit about Edenshaw

The project is the latest from Edenshaw, which was founded in 2009 in the Mississauga neighbourhood of Port Credit by president and chief executive officer David McComb.

He oversaw the development of Concord CityPlace and Concord Park Place, the two largest master-planned communities in Toronto, before branching out on his own.

Gerasolo, who oversees acquisitions and sales, said Edenshaw’s target area is: south of Highway 401; west of the Don Valley Parkway, aside from Toronto’s The Beaches neighbourhood; north of Lake Ontario; and no further west than Oakville.

Its primary holdings are in Port Credit, Mississauga’s city centre and Toronto.

The 32-storey, 418-unit, CORE Architects-designed Alba is located at 1 Fairview Rd. E. near Hurontario Street. The empty site was owned by a private family and acquired in an off-market transaction for an undisclosed price.

While Hurontario is a main artery running from Lakeshore Road north into neighbouring Brampton, Fairview is an east-west street that leads into a low-density neighbourhood with low-rise homes, parks and trails.

The site is south of Hurontario and Burnhamthorpe Road, which is considered Mississauga’s city centre.

“At the corner of Fairview and Hurontario, you get the perfect mix of being located right in the city core where you’re walking distance to Burnhamthorpe and Hurontario, but it’s also situated on the east side of the street, which allows you to have unobstructed eastern views of the city of Toronto and the lake,” said Gerasolo.

Alba residents will be able to easily access the Hurontario Light Rail Transit line that’s under construction via a stop at Fairview, and the Cooksville GO Transit station is a five-minute walk away.

What Alba has to offer

Alba has gone through rezoning and sales have just launched, although an official price list for units hasn’t yet been released.

Sizes will range from 427-square-foot one-bedroom units to 863-square-foot two-bedroom-plus-den units. There will also be four larger townhomes as part of the project. Condo fees will be 60 cents per square foot.

There will be more than 20,000 square feet of indoor and outdoor amenities, including: a co-working and business centre; a children’s play room and outdoor play area; a pet spa and outdoor dog run area; a maker studio; a terrace with barbecues, lounge seating and dining areas; a party room with a demonstration kitchen; a gym with a social lounge; a games room; a commercial laundry room with a lounge; and guest suites.

Alba will also include a geothermal system, resulting in a lower environmental impact and cost savings for residents.

“Geothermal systems eliminate the use of natural gas to heat and cool the entire building and reduce the amount of energy required to operate the condominium’s central systems,” said Gerasolo.

Gerasolo is hopeful sales will be completed quickly so construction can start next year and aim for a mid-2025 completion.

Edenshaw also has several other projects under development.

Gerasolo said Tanu will be completed and ready for occupancy in October or November.

Westport is a 22-storey, 359-unit condo that’s also designed by IBI Group and close to the Port Credit GO Station at 28 Ann St. Suites range from 453 to 1,023 square feet and Gerasolo said they all sold within a month last year.

Westport is under construction and occupancy is expected in two years.

The Residences of Gordon Woods is a high-rise condo with retail that’s in the pre-construction phase at 2120 Hurontario St. in Mississauga.

Edenshaw also has plans for high-rise condos at 625 Yonge St. in Toronto and 46 Park St. in Port Credit.

“We have some projects that will be slated for release every year for the next two to three years,” said Gerasolo.

RENX Staff Commercial Transactions Toronto / GTA Jul. 5 2021
Steve McLean Business reporter
Steve is a veteran writer, reporter, editor and communications specialist whose work has appeared in a wide variety of print and online outlets. He’s the author of the book Hot Canadian Bands and has taught reporting to college students. He is based in Toronto.