The transformation of Mississauga’s waterfront through major new developments is in its early sta... 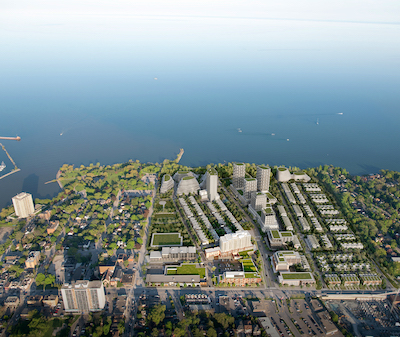 An aerial view of the Brightwater redevelopment planned along the Mississauga waterfront in the city just west of Toronto. (Courtesy PCWVP)

The transformation of Mississauga’s waterfront through major new developments is in its early stages, but the excitement was palpable during an Urban Land Institute webinar which offered updates on the projects.

Bonnie Crombie, Mississauga’s mayor since 2014, opened by reciting facts about Canada’s sixth largest-city. She said it’s no longer a bedroom community for Toronto. The city has become a net importer of jobs with an annual gross domestic product of more than $60 billion. It’s home to 75 Fortune 500 companies and more than 94,000 businesses.

Rapid transit infrastructure is being created to connect Mississauga with the wider Greater Toronto Area. A series of projects are also making exciting changes to its 22 kilometres of Lake Ontario waterfront, which is moving away from heavy industrial uses to plans focused on the public realm.

“They envisioned sustainable mixed-use communities, cultural amenities and vibrant communities with public art, parks and open spaces that bring people to the water and the water to the people, economic and job-creating opportunities, the potential for innovation, and smart technology that would equip these communities to compete in the 21st century,” said Crombie.

“They envisioned a new type of development in Mississauga — not cookie-cutter subdivisions, but communities unique in their architecture and their built form(s), in their commitment to sustainability, and in their overarching goal to make the waterfront accessible to everyone.“

PCWVP development vice-president Christina Giannone said these opportunities don’t come around often, so “developers have a major responsibility to get it done right.”

An international design selection competition was held and world-renowned designers and consultants were brought in.

The PCWVP team has met regularly with City of Mississauga staff members, ratepayers associations and a number of other stakeholders to attempt to align visions and plans and address challenges.

Brightwater has approximately 3,000 residential units approved and 300,000 square feet of commercial space that will generate more than 1,000 jobs, as well as 18 acres of parks and amenities.

It’s connected to Lake Ontario and the Waterfront Trail and is located minutes away from the Port Credit GO Transit station, the Credit River and Port Credit’s variety of retail and service options.

A campus at the southeast corner of the site will become a place for learning, innovation and creativity, and an institutional or post-secondary tenant is being sought.

“We’re looking to develop communities where people can live and work, where they can access good-paying jobs at the same time as world-class culture and recreational amenities, while also enjoying a high quality of life and also living sustainably,” said Mississauga strategic initiatives director Robert Trewartha.

Parks need to function as community spaces for residents as well as tourism and destination locations, so a mix of amenities serves both purposes, said Mississauga director of parks, forestry and environment Jodi Robillos.

“The goal is to create dynamic year-round experiences. The city has a lot of existing parks along the waterfront and they’re very heavily used, even moreso in this past year. I think we’ve seen, in areas where we have people counting, an over-300 per cent increase in our utilization in our waterfront parks.” 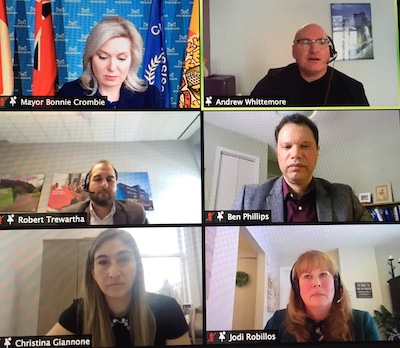 The partners are working through approvals to bring 8,000 residential units and 180,000 square feet of commercial space online at Lakeview Village. It will incorporate a district energy and vacuum waste system to offset more than 6,000 tons of greenhouse gases annually and use smart technology to enhance what Crombie said is Mississauga’s reputation as the most connected city in Canada.

Lakeview Village will feature a 47-acre innovation corridor along the east side of the site that will have a mix of public and private ownership.

It will eventually be home to companies occupying 1.8 million square feet of employment space accommodating more than 9,000 skilled jobs focused on science, life sciences, technology, advanced manufacturing and culture. An institutional or post-secondary partner is also wanted for a campus on this site.

A cultural district will feature public art and spaces for artists to make a living at their craft while animating the community.

– have a retail and commercial hub with stores, restaurants and activities;

– be part of a fully connected Waterfront Trail;

– feature the longest pier on the Canadian side of Lake Ontario;

– have expansive parks and amenities;

– and include 64 acres of reclaimed wetlands using fill from the former Lakeview generating station, to be named after former Mississauga councillor Jim Tovey.

The City of Mississauga is also working with Canada Lands Company to revitalize the Port Credit Marina and develop a mixed-use community that includes reclaimed parkland. This project will need the support of the provincial and federal governments to move forward.

Increased congestion on Lakeshore Road East has led to the creation of the Lakeshore Connecting Communities Master Plan, which guides planning and investing in the transportation network in the Lakeshore corridor, including questions about optimizing roadways, improving public transit and enhancing cycling and walking connections.

The recently approved Lakeshore bus rapid transit system at the eastern end of Lakeshore Road will connect with the Long Branch GO station, while the soon-to-be-built Hurontario light rail transit line will connect Brampton in the north to the Port Credit GO station in the south.

Phillips said plenty of work has gone into creating an active transportation network with complete streets, cycling lanes and sidewalks for the new communities.

Crombie said the city is working with the Brightwater and Lakeview Village development partners to explore “micro-mobility solutions,” including autonomous shuttles.

“Both development partners have been just that, partners in every sense of the word,” said Crombie.

Steve McLean Commercial Transactions Toronto / GTA Jan. 19 2021
Steve McLean Business reporter
Steve is a veteran writer, reporter, editor and communications specialist whose work has appeared in a wide variety of print and online outlets. He’s the author of the book Hot Canadian Bands and has taught reporting to college students. He is based in Toronto.