The focus of RioCan REIT’s portfolio transformation these days is in Toronto and Calgary, where i... 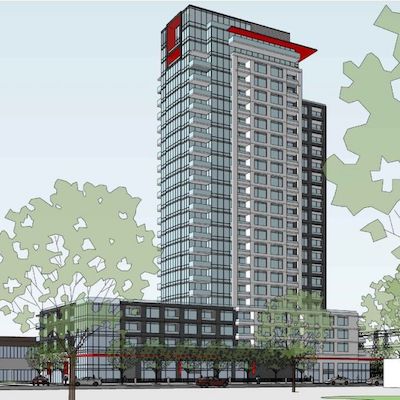 The focus of RioCan REIT’s portfolio transformation these days is in Toronto and Calgary, where it has several developments on the go. Some of that attention, however, could soon shift to Ottawa where the trust and its RioCan Living arm have one major project in the ground and at least three others pending.

RioCan (REI-UN-T) owns 32 retail properties in the sprawling city. Several of those will soon undergo significant redevelopment, president and COO Jonathan Gitlin said in a recent interview with RENX.

“It is one of our largest markets, it’s one that we are focused on growing and always improving,” he said. “In every one of our shopping centres there, we are always looking to improve it, be it by adding another pad to the site or by simply improving the aesthetics or the tenant mix to suit the community around it.

RioCan and partner Killam Apartment REIT (KMP-UN-T) are currently occupying the first apartment high-rise at their Frontier development in the city’s Gloucester neighbourhood.

Shovels are in the ground for the second of the five towers planned for that transit-oriented site, which sits next to RioCan’s Silver City Gloucester entertainment and retail centre, as well as a neighbouring shopping centre.

Its upcoming developments at the west-end Westgate and Lincoln Fields shopping centres, as well as Elmvale Acres and Shoppers City East are all in the planning and approvals stages.

First up will be Westgate, an aging enclosed shopping centre west of downtown along Carling Avenue. Anchored by a Shoppers Drug Mart and Service Ontario outlet, the facility will be redeveloped in phases into a mixed-use site.

As with many of its retail redevelopments, Gitlin says construction will be planned to prevent the loss of needs-based retailers which serve local residents.

“It’s a very large site and we don’t want to disrupt any of the successful existing retail tenancies,” he said. “We have the ability to build a very attractive and forward-looking residential property in a discrete portion of the overall property so it will really enhance the existing retail offering, not disrupt it.”

An exterior pad containing a restaurant will be demolished as part of Phase 1. In its place will be a 24-storey mixed-use building with a four-storey podium, 216 rental apartments, and 20,000 square feet of retail. Depending on permitting, construction could begin late in 2019 or in 2020.

“We feel that the marriage of really good retail and very strong residential makes each component better, so we plan to make sure we put the right type of retailers at the base of the residential building,” Gitlin said.

Amenities will include fifth-floor outdoor patio facilities, other communal spaces, parking for 195 bicycles and underground parking.

Later phases include four more buildings, two at 36 storeys and two at 24 storeys. Three would be along Highway 417 at the back of the property. They would include mixed-use components.

“It will be attractive from an aesthetic perspective, but also provide what we feel are much-needed new rental units in that area,” Gitlin said. “The design of the building will be similar to so much of the other RioCan Living product types.

“It will have forward-thinking amenities that will appeal to various types of demographics and it will also be nicely combined with the retail that is both adjacent to it and at the base of the building.”

Although not on the city’s planned LRT expansion (slated for completion by 2024), the site is on a major bus corridor and a short walk or bus ride from a planned LRT station.

The Lincoln Fields redevelopment, a few kilometres east along Carling Avenue, is similar.

“It’s never a coincidence when we are building that close to transit,” Gitlin said. “We are, and have always been, focused on bringing good thoughtful transit-oriented developments to cities. Both of these are well-suited to that goal.”

Lincoln Fields is another aging retail site, which lost its anchor Wal-Mart store to the much larger nearby Bayshore Shopping Centre.  The 285,000-square-foot enclosed mall is now anchored by a Metro food store and a Rexall pharmacy, but has numerous vacancies.

“Lincoln Fields is a critical property for us. It is a long-term prospect for it to be transit-oriented,” Gitlin said, meaning the addition of residential components at the 16-acre site.

“Lincoln Fields as a shopping centre has seen its best days behind it. It once served the community as a very critical element of it, but I think things have changed a little bit there. I think the changing needs of that community necessitates a bit of an overhaul to the existing retail facility.”

Gitlin said the community would benefit from updated residential options, with virtually all of its existing stock decades old.

“It’s a tremendous community with a lot of existing older residential buildings in the neighbourhood, but not a lot of new residential offerings. So, our long-term view here really is to bring some much-needed new stock rental housing to the market and also some necessity-based retail.”

RioCan has yet to unveil its final plans. It has filed a Phase 1 proposal to build a two-storey retail building, and a separate building for the Metro store, then demolish the existing mall.

In the Eastern portion of Ottawa, where it is also building Frontier, a portion of RioCan’s Elmvale Acres shopping centre redevelopment is also likely to begin soon. At this site along St. Laurent Boulevard, the REIT plans four phased mixed-use buildings ranging from nine to 16 storeys with 570 apartments.

Current site plans show retention of most of the 146,000 square feet of retail on the property.

Finally, RioCan’s Shoppers City East is slated for an upgrade or densification, though Gitlin said he can’t comment on that site at the present time. RioCan bought the property from Ottawa-based Trinity Group a few years ago, when it was slated for a new Costco location.

Plans submitted to the city in 2017 show several residential/mixed-use towers with up to 540 apartments, a large retail building and the existing retail pads. About 28 townhomes could also be constructed.

The timing of these projects will be determined both by local demand and by RioCan’s nationwide development pipeline. It has 2,300 apartments under construction, and another 2,000 in active planning stages.

“If you drive around places like Toronto and Ottawa and even Calgary, you will see the fruits of our labour coming to fruition now with some beautiful city-building type assets that are just remarkable to the eye, but also a great component of our portfolio.”