RioCan to sell $2B in property, focus on major markets

RioCan Real Estate Investment Trust (REI.UN-T) is taking the final major step toward becoming a REIT which focuses almost solely on Canada’s six largest urban markets. The trust announced Monday it will sell about 100 properties, valued at nearly $2 billion, in secondary markets across the country. 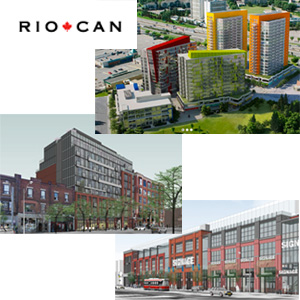 At the same time, RioCan CEO Ed Sonshine said the trust doesn’t expect its FFO to take a hit, because of major redevelopments it has already started, and will be completed over the next year or so.

“The simple fact is that while the properties we intend to sell are solid, reliable income properties, the annual NOI growth lags the growth we are able to achieve in our primary market portfolio.” Sonshine told analysts and media on a conference call. “At the same time the current phase of our development program will have sufficient completions over the next few years to more than make up for that which we’ll be selling.”

It also announced about two years ago it would undertake an extensive program of redevelopment and intensification at up to three dozen existing retail/commercial sites which it considers to be underperforming. Two major Toronto projects (Yonge and Eglinton, and King and Portland) as well as two projects in Calgary are nearing completion.

“This is a pipeline we’ve been creating for years and the finished products, including our first residential rental tower at Yonge and Eglinton, will all start adding to FFO by the end of this year or beginning of next year,” Sonshine said.

It late 2015, it exited from U.S. markets, selling its 49 American properties to The Blackstone Group for about $2.7 billion.

Sonshine also laid out management’s vision of what RioCan will look like by 2020 when it has divested these properties, the first round of redevelopments are complete and a new round underway.

“First, it will have well over 90 per cent of its assets in Canada’s six major markets, with over 50 per cent of those assets by revenue here, in the Greater Toronto Area,” Sonshine said. “Two, it will have annual same property growth of at least three per cent, resulting in FFO growth of at least five per cent, which will then allow our board to approve appropriate distribution increases, hopefully annually.

“Equally important, every property RioCan owns by then will have a story of what can be done to improve it, or change it, to adapt to whatever the changing face of business and population growth requires. That story on certain properties may be 20 years in the future, but that is OK.”

RioCan expects about $1.5 billion in revenue from the sale, after expenses and paying off about $500 million in existing financing on some of the properties. About half of the revenue will be used to buy back its own stock.

“Our unit price is at levels that make a robust NCIB program very sensible,” said Sonshine. “Not only are we trading before our IFRS value, that number does not take into account the value of our platform, nor does it take into account the approximate $1B of value in our zoned, or almost zoned, densities, the vast majority of which is in the GTA.

“We estimate that value of density is in the neighbourhood of $3 per unit. And that is just the density we have already identified and have either already zoned, or applied to have zoned but not yet monetized or started to build.”

RioCan also plans to continue reinvesting $300 to $400 million annually in its development and redevelopment program.

Sonshine would not discuss specific properties which are on the sale block, nor would he reveal if any potential deals are already in the works. He did say market conditions are favourable for the sale and RioCan will be strategic in releasing the properties or portfolios.

In all, about 12.5 million square feet of gross leasable area will be sold off. He said occupancy of the portfolio for sale is about 93.5 per cent, compared to RioCan’s 96.5 per cent overall occupancy rate.

“The success of the program will, quite frankly, dictate the timing. If we find big appetites out there which will lead to better pricing, then obviously we may accelerate,” he said.  “Conversely we may slow it down.

“But there are lots of interested buyers. We have been pleasantly surprised by the numbers of people who have expressed interest.”

He said interest has come from both other REITs and private investors since the acceleration was first discussed during RioCan’s Q2 conference call with its investors. Although “we’re pretty confident of this list,” Sonshine said there could be additions or deletions based on individual transactions and market conditions.

Other highlights of announcement

Other notes about the announcement:

* In response to questioning, Sonshine mentioned properties in London, Orillia, Collingwood, Renfrew and Leamington, Ont., are among those to be sold;
* Sonshine said the portfolio to be sold consists of “a real mixed bag. There’s an awful lot of grocery or Walmart anchored shopping centre strips. The amount of malls, I think, is relatively insignificant. Quite frankly that was the first thing we sold back when we were starting (this process).” There are also retail power centres and single-tenant properties;
* The weighted average cap rate for the sale properties is about 6.5 per cent. Sonshine said that’s about 1.5 per cent lower than the rest of the portfolio on a year-to-date basis;
* Suspension of its Distribution Reinvestment Plan (“DRIP”) effective Nov. 1, 2017, in order to maximize the effectiveness of the NCIB;
* RioCan is retaining some secondary market assets which it sees as exceptional properties, or those with significant redevelopment potential. Two examples are a joint venture with HBC in Barrie and the Tillicum Centre in Victoria. “Victoria is not one of the primary markets, but it’s a great market,” Sonshine said;
* RioCan owns 100 per cent interests in all but “eight or nine” of the properties for sale;
* About 15 of the sites for sale, Sonshine said, have “shadow anchors” such as Walmart, Canadian Tire or a supermarket.

Although the stated goal is to have at least 90 per cent of RioCan’s revenues coming from the six major markets, Sonshine actually expects it to be higher.