Our quarterly market reports have just been released and we’re pleased to report the overall industrial vacancy rate is heading in the right direction! 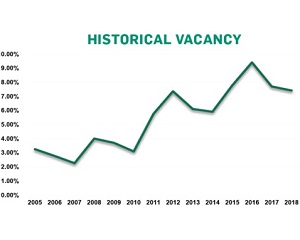 The increase in absorption over the last quarter has resulted in just over a 50-basis point decrease in vacancy from 7.5 to 6.9 per cent.

We have, however, seen the average asking net rental rate decrease from $10.61 to $10.20 per square foot. (A summary of the key stats is available in this graphic from ICR Commercial)

This reduction in inventory is welcome news for industrial landlords who have struggled through vacancy which exceeded nine per cent in 2016.

Effects of NAFTA 2.0 or USMCA

It’s encouraging to see this positive market movement in spite of the fact there has been so much uncertainty surrounding the NAFTA negotiations and construction of pipelines.

Total Saskatchewan exports to the United States in 2017 were $29 billion. The U.S. remains Saskatchewan’s No. 1 market, by far, with just over half (55 per cent) of our 2017 exports being shipped south.

We have noted an increase in activity and a more positive client outlook across all sectors since USMCA was announced at the beginning of the month.

This should bode well for continued absorption within the industrial sector, which represents 54 per cent of the total Saskatoon commercial real estate market, or 18.7 million square feet.

When studying this sector of the market, our Market Analyst divides the city into eight districts. I was curious to see how our two main industrial areas are performing.

New construction remains slow. Investors have been reluctant to risk adding to the current oversupply of space. I would however expect to see an increase in purpose-built construction by owner occupants next spring.

And . . . if a solution is found to the pipeline(s) impasse, we could even see new activity in spec construction.

Contact me for copies of our full. 3Q18 reports for Saskatoon or Regina Industrial, Retail, Office or Parking Surveys.