Something big is happening for transit in the Greater Toronto Hamilton Area (GTHA), but you might...

Something big is happening for transit in the Greater Toronto Hamilton Area (GTHA), but you might not have heard much about it in the news.

Metrolinx is transforming its GO Transit rail network and it’s going to make travelling across the GTHA faster and much more convenient.

Known as the GO Expansion (previously the Regional Express Rail or RER), the project has flown under the radar compared to other major transit projects in the City of Toronto, even though its impact-to-cost ratio has significant potential.

For reference, the estimated cost in 2018 of the GO Expansion was around $16.2 billion, or about $62 million per kilometre.

Part of the reason for this low cost is the GO Expansion re-uses a lot of existing infrastructure but still results in a number of improvements.

This includes the creation of new tracks, station expansions, electrification of some rail lines, more frequent train arrivals and more two-way and all-day schedules for lines which currently operate in only one direction during morning and evening rush hours.

The federal government announced it would contribute $1.9 billion to the project in 2017, but the road to implementation will be a decade-long journey. The procurement process is still taking place, but construction is expected to be underway by 2022 or 2023 and will be completed in phases.

Completion of the GO Expansion may seem like a long way out, but if we want to get the most out of this transformation, we need to start planning our communities accordingly now.

The GO Expansion was originally known as the Regional Express Rail, inspired by the Réseau Express Régional in Paris, which connects Paris and its surrounding suburbs.

Compared to Paris and other large cities like London, Toronto’s regional service is lacking (see below). However, like the Réseau Express Régional, the GO Expansion in Toronto will transform a commuter-oriented system to one more similar to a subway that runs at least once every 15 minutes. 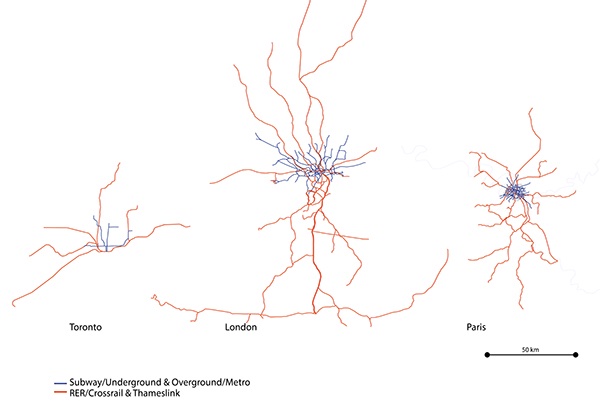 Of course, Toronto’s new system won’t be exactly like a subway. Its stations will be five times more spread out and it will travel at faster speeds since it won’t need to stop and start nearly every kilometre like the subway does.

The longer distance between stops is necessary to justify the expansion into Toronto’s less densely populated suburban areas. This does mean that many users may still need to drive, bus or cycle to the station, but likely only between two and three kilometres.

This will take time to implement, but the hope is that more and more people living in “suburban” centres will be able to walk to the station from their homes in 15 minutes or less.

For instance, after the Town of Newmarket found out it might be getting a second GO station along Mulock Drive, it committed to increasing density in the area, as outlined in the new Mulock Station Area Secondary Plan.

Similarly, Durham Region published a report in December 2020 on policy directions for its Major Transit Station Areas. The proposed policy in the report will impact planning around the GO stations in Pickering, Ajax, Whitby and Oshawa, all of which will see more frequent service under the GO Expansion.

Cooksville in Mississauga is another area planning for increased density because of upcoming transit transformations. In 2016, the City of Mississauga put together the Vision Cooksville Report, which outlines a long-range plan for the community in part inspired by the planned transit investments.

Last year, Oakville proposed an Official Plan Amendment that will update the land-use policies for Midtown Oakville near the Oakville GO station.

Midtown Oakville is an urban growth centre as outlined by the provincial Growth Plan and the amendment will enable the area to meet its growth targets.

It will also help Midtown Oakville take advantage of the upcoming transit opportunities by ensuring the area is pedestrian-oriented, has improved connections throughout and promotes a compact form with higher density and higher intensity land use.

The execution of transit-supportive planning like that in Newmarket, Durham Region, Cooksville and Midtown Oakville are going to be essential in getting the most out of the GO Expansion.

Perfect timing for a change

The GO Expansion could transform the way the GTHA experiences transit and it couldn’t be coming at a more consequential time. The past two years have illustrated the fragility of the commuter schedule.

Trains built around 9-to-5 schedules from suburb to centre and back are not adaptable to disruption and diverse user needs. Having an entire transit network that counts on this one type of trip and one type of transit user is no way to build a thriving city.

Over the course of the pandemic, city dwellers have flocked to the suburbs as concerns about long commutes have disappeared due to remote work. These so-called “secondary markets” offer perks like backyards and space for a home office.

They include places like Oshawa and Brampton that have recently seen soaring housing prices due to increased demand. Areas like this are going to benefit significantly from the expansion.

Once pandemic restrictions are fully removed, many of these new suburbanites may start commuting to the city again for the jobs they’re currently working remotely or for the entertainment and activities that drew them to the urban centre in the first place.

Once constructed, the GO Expansion will be there ready to support these flexible and geographically fluid lifestyles.

If implemented well and if suburban planning takes advantage of this opportunity to increase density near transit stations, the GO Expansion could be the next step in Toronto’s journey towards being a truly connected and modern city.

Retail at grade: When does recipe for success become overbearing policy?