Winnipeg’s newest industrial area, the Plessis Business Park in the southeast sector of the city,... 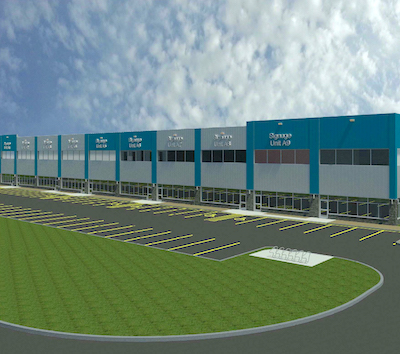 The first building of five to be constructed at the Plessis Business Park in Winnipeg. It’s located in the much larger St. Boniface Industrial Park. (Courtesy Shindico)

Winnipeg’s newest industrial area, the Plessis Business Park in the southeast sector of the city, will soon have its first tenant.

Metal Depot, a wholesaler and fabricator of metal roofing and siding for residential and commercial development, is about to move in to the first building being constructed in the park. It is being developed by Shindico Realty Inc., as part of the much larger St. Boniface Industrial Park.

“And our lease was up at the end of July.”

The company has experienced consistently strong growth for years, and was only considering new digs in the same area as its current location in the fast-growing St. Boniface Industrial Park. Then Speirs got a “dialing for dollars” cold call from Shindico, which is developing the 22-acre Plessis Business Park sector.

The St. Boniface park is one of the largest developable spaces in and around the city for industrial use, offering about 250 serviced and un-serviced acres, according to data from the Government of Manitoba.

The Plessis Business Park is among the latest major developments at the eastern edge of the St. Boniface industrial zone, said Alex Akman, manager for property management and development at Shindico.

The Plessis park, which has been under development for less than a year, brings to bear the Winnipeg-headquartered company’s expertise in developing hundreds of millions of dollars’ worth development over the last two decades across North America.

“We have a good idea of what users want from past projects, so we’ve taken what we’ve learned and put it into this building.”

The company’s first build in the park, located at 475 De Baets St., will be complete by July 31. At about 38,000 square feet, the building has enough space for nine tenants, including Metal Depot.

When it’s complete, the Plessis park is intended to contain five buildings and comprise more than 260,000 square feet of GLA.

Location key to both business parks

A key attraction to both Plessis and St. Boniface is location, Akman said.

“One of the big benefits of Plessis Business Park and St. Boniface (Industrial) Park as a whole is close proximity to amenities.”

The site is about five minutes’ drive from a major mixed-use hub on Regent Avenue, as well as major roadways, including the Trans-Canada Highway. The new building will also serve as a blueprint for other developments in the park.

Featuring ample glazing for natural light, rather unique for light industrial use buildings, it is also designed for easy truck access.

As well, it has an allowance for signage at the back of the property, facing onto a major route (Plessis Road) increasing the public profile for tenants.

Yet the feature that truly sets the new development apart from most other light industrial buildings in the St. Boniface Industrial Park are its 28-foot ceilings.

“Industrial users typically look at volume and not square footage,” Akman said, citing the need to stack supplies and product.

Most industrial park buildings have 14- to 16-foot high ceilings, including many within the St. Boniface park, he adds. 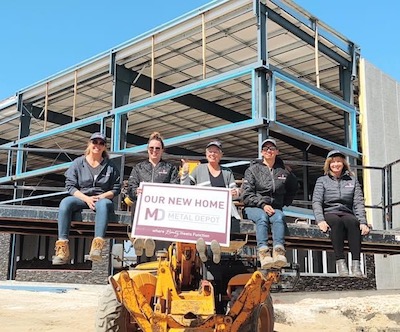 Staff members of Metal Depot check on the progress at their new home in the Plessis Business Park in Winnipeg. (Courtesy Metal Depot)

“We’ll be able to bring 90 per cent of our raw product inside at our new location,” Speirs says, adding the company looked at older buildings within the St. Boniface park and new locations just outside the northwest city limits.

“Going to the new building was a good match for our growth strategy and the need for a better layout.”

Speirs adds the company of about a dozen employees will, for example, be able to increase showroom space.

Additionally, the Plessis development is among the parts of the St. Boniface park with city services and transit access, key competitive advantages to new locations just northwest of Winnipeg.

The premise for the development comes on the back of a recent modest renaissance for industrial real estate in Winnipeg, according to a recent Colliers report.

Yet COVID-19 has dampened expectations for 2020, it further notes. Even before the pandemic, however, the city’s southeast offered consistently lower rents, in part because it had experienced less development than other areas.

Other plans in and around St. Boniface

Still, demand has been growing with phase 1 (where the Plessis development is located) of the two-phase park sold out, based on city data. Among the recent openings is a new GFL recycling plant.

Akman adds the St. Boniface Industrial Park’s proximity to the soon-to-be-developed Canada Packers lands – formerly zoned for industrial – will be yet another attractive amenity.

The 165-acre patch land on the western edge of the St. Boniface Industrial Park was previously under consideration as the site for the new Winnipeg Blue Bombers stadium (which ended up being built near the University of Manitoba).

Now, Calgary-based Olexa Developments has a multi-million-dollar proposal, which Shindico is also involved with, before city council for a mixed-used area of residential, office and retail.

That will bode well for future of the Plessis Business Park and the St. Boniface Industrial Park overall, Akman said.

* Winnipeg CRE could be a Western leader post-COVID