Slate has monopoly at Toronto’s Yonge and St. Clair

Five office buildings near the intersection of Toronto’s Yonge Street and St. Clair Avenue were t...

Five office buildings near the intersection of Toronto’s Yonge Street and St. Clair Avenue were the jewels in Slate Asset Management’s 2013 acquisition of GE Capital’s Canadian real estate holdings, and Slate has since added three more nearby properties as it looks to revitalize the neighbourhood. 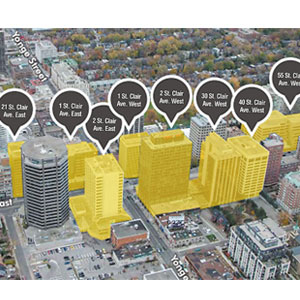 “We saw a tremendous opportunity as the whole area had been overlooked and we didn’t see any reason for that,” said Slate managing director Lucas Manuel. “From an investment thesis standpoint it was a pretty low bar to jump over.”

While about 50,000 people come and go through Yonge and St. Clair via its subway and streetcar lines and about the same number pass by in cars, it’s largely a nine-to-five office node. Slate’s goal is to bring some energy back through more vibrant retailers, restaurants, bars, streetscapes and public art.

Slate owns all buildings at intersection

Slate is in the unique position of owning the buildings at all four corners of Yonge and St. Clair, comprising about 1.2 million square feet of office inventory, in partnership with Greystone Managed Investments.

A 15-storey office building at 2 St. Clair Ave. E. with two levels of retail and a connection to the St. Clair subway station is the first to be revitalized as part of a joint effort with the Weston family, which owns the office tower next door and shares its retail concourse.

“We’re still at the table with some retail groups, but we’re certainly pretty excited about some of the potential and opportunities we’re seeing at Yonge and St. Clair,” said Manuel.

New landscaping and the addition of a Starbucks, Greenhouse Juice Co., Rexall and TD Canada Trust bank branch are big parts of a renovation that should be done by the end of the year and act as a springboard for redevelopment of the other three corners.

“We’re going to start by developing a plan that will include our properties and things we can do immediately, but we have a vision that’s bigger than our properties,” said Manuel. “We want to work with the City and hopefully some of our neighbours in realizing that.”

Revitalization at all four corners

The 11-storey building at the southeast corner purchased earlier this year from Scotiabank will get a revamped bank branch, another retail opportunity, renovated Toronto Transit Commission concourse, improved streetscape and updated curtain wall up to the fourth storey.

A wall of the 12-floor CIBC building at 1 St. Clair Ave. W. just acted as a canvas for a large-scale mural by artist Phlegm that came together through the joint cooperation of public arts organization The STEPS Initiative, the City of Toronto’s StreetARToronto program and Slate.

The innovative piece of art — which reflects the geology of Toronto’s urban landscape, skyline and most recognizable landmarks — has received a very favourable response that Manuel hopes will bring more attention to the intersection.

The 21-storey former CFRB building at the northwest corner of the intersection is the only one without a bank branch and the plan is to revitalize it with what Manuel called a “big and splashy” restaurant after tearing down a two-floor facade.

The goal is to have the redevelopment of all four corners of the intersection completed within two years. Slate will make smaller scale retail improvements in its other four neighbourhood buildings at 21 St. Clair Ave. E. and 30, 40 and 55 St. Clair Ave. W.

“We’re a couple of years in and when you buy real estate there are lease terms that you’re beholden to,” said Manuel. “We’re navigating our way through that.”

The office buildings in the portfolio were constructed from the 1960s to ‘80s and have floorplates of approximately 15,000 square feet, which aren’t as efficient as newer and larger ones. However, Manuel is hoping that obstacle can be overcome by offering tenants exterior building signage that’s more prominent than it would be farther south in the downtown core.

Approximately 97.5 per cent of the office space in Slate’s Yonge and St. Clair portfolio is occupied, with Manuel saying there’s one full floor in one building and “a few small pockets here and there” available to lease.

“Everything’s performing. If we have vacancies it’s almost on purpose because a building is undergoing some change.”

One of the big advantages of owning a large cluster of properties in close proximity to each other is that it allows Slate to make quick decisions and changes and think more creatively. It also gives it more flexibility when dealing with office and retail tenants.

“We did a really big renewal and expansion with Equitable Bank and ended up having to swing them into other buildings that we own as we restacked their space in one of our office buildings,” said Manuel. “Without having owned those other buildings we likely would have lost those guys.”

Slate and Greystone also jointly own buildings near Yonge at the intersections of Bloor Street, Eglinton Avenue and Sheppard Avenue, and there’s an obvious transit focus to their holdings, but the Yonge and St. Clair portfolio has a strategy that’s all its own.

“We’re invested and spending a lot of capital and time to try and make that intersection better, and we’d like to be the beneficiaries to whatever extent possible of those changes,” said Manuel. “If we can own more, we’d love to own more at Yonge and St. Clair.”

Slate will do some redevelopment of its 12-storey office building at 151 Bloor St. W. this fall and Manuel said there are other things the company is working on that he can’t yet talk about.

“It’s very competitive with any high-yielding real estate in Toronto right now. With most of the stuff we see, you have to look through the lens and see some redevelopment or repurposing or revitalization potential to make sense of the pricing.

“Slate’s roots are in value-add and you have to have that view to be the guy who pays the most for the property at the end of the day. With any trade you see in the market right now, there’s some element of development or redevelopment potential down the road that you have to take to spend what you need to spend.”

Slate manages and co-invests in assets exceeding $3 billion and has sold assets for proceeds in excess of $2 billion.