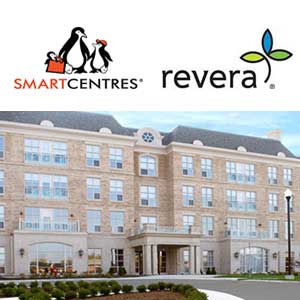 The three companies said Monday afternoon in a release they have already selected three SmartCentres properties and another property owned by Penguin, all in the Greater Toronto area, to kick off the partnership. They have not yet identified the sites, saying they will make further announcements “in the coming months.”

The partners said they intend to develop and open at least five new retirement residences annually.

“While our shopping centres have never been busier, especially with Walmart as our main anchor tenant, our strategy is now expanding to focus our development horsepower on residential, seniors, office and storage initiatives in order to extract deeply embedded value from each of our existing properties across Canada,” said Mitchell Goldhar, chairman of the board of SmartCentres and owner of Penguin, in the release.

“This strategy will provide new sources of non-retail income growth.

“Senior homes with Revera, a first-in-class partner, aligns very well with this plan.”

The retirement living residences will be co-owned 50/50 by each partner in landlord/tenant structures and in operating structures.

The seniors housing sector is a fast-growing industry with demand forecast to rise significantly as the Baby Boomer generation ages, and as Canadians live longer.

Plenty of activity in retirement sector

“This deal will be an important accelerator to Revera’s growth strategy,” Thomas Wellner, president and chief executive officer of Revera, said in the release. “SmartCentres’ national scope and unrivalled development expertise will help us to bring more diverse seniors housing options in desirable locations to Canadian seniors more quickly.”

The seniors living sector is projected to explode in Canada during the next couple of decades, with an aging population increasingly requiring more retirement options. Consolidation and construction are both taking place within the seniors sector as companies position themselves to meet the demand.

Sienna Senior Living recently announced it will buy 10 retirement homes in the GTA, Ottawa area, Eastern and Central Ontario regions from several former owners for $382 million. Those deals are to close in Q2 2018.

In late 2017, Reseau Selection announced it is purchasing three residences in Quebec, comprising a total of 710 apartments and more than 1,000 residents. Financial terms were not disclosed.

In Alberta, Chartwell Retirement Residences announced the purchase of five facilities in and around Edmonton, comprising 1,031 suites. About 300 of the suites remain under construction at two of the sites. Chartwell paid $298 million for the facilities.

Revera is a leading owner, operator and investor in the senior living sector.

Through its portfolio of partnerships, Revera owns or operates more than 500 properties across Canada, the United States and the United Kingdom, serving more than 55,000 seniors. The company offers seniors’ apartments, independent living, assisted living, memory care, and long-term care.

SmartCentres is one of Canada’s largest real estate investment trusts with total assets of approximately $9.3 billion.

It owns and manages 34 million square feet of retail space in value-oriented, principally Walmart-anchored retail centres, featuring national and regional retailers as well as neighbourhood merchants. In addition, SmartCentres is a joint-venture partner in the Premium Outlets locations in Toronto and Montreal with Simon Property Group.

SmartCentres is expanding the breadth of its portfolio to include residential (single-family, condominium and rental), retirement homes, office, and self-storage, either on its large urban properties such as the Vaughan Metropolitan Centre or as an adjunct to its well-located existing shopping centres.

About Penguin Group of Companies

Penguin Group of Companies is a private company owned by Goldhar.

Goldhar has also developed an emerging network of Penguin Pick-Up locations offering free pick-up for online purchases, and Penguin Fresh, an on-line food marketplace. The Penguin Pick-Up network has 76 locations, including some co-branded with Walmart.