VersaCold’s 572,192-square-foot facility in Milton, Ont. will be Canada’s largest temperature-sensitive warehouse once construction wraps up in the next few months. 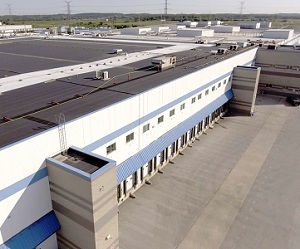 “It was retrofitted within the four walls, but there was 280,000 square feet of temperature-controlled space which is now all freezer,” said Colliers International executive vice-president Dane Gilbert, who oversaw the complex lease negotiations which brought everything together.

“The dry space, which is roughly 270,000 square feet, was converted to freezer space. This was done through three transactions over a 12-month period.”

The facility, on a 38.72-acre site at 2701 High Point Dr., is owned by Greystone Development and managed by Triovest. It was acquired through a sales leaseback with Sobeys. Before the redevelopment, it had 96,000 square feet of freezer space and surplus refrigeration capacity.

The retrofit of the facility could be completed faster and more cost-effectively than greenfield construction’s three-year timeline — which would have encompassed site selection, design, site plan approval and construction. That drove the lease deals forward for the Milton building.

“Construction costs of cold storage are approximately double that of a generic warehouse,” said Gilbert, who noted lease rates for such facilities are also commensurately higher. “The barriers to entry are very high in the cold-storage industry, so companies build their growth plans around existing buildings and make geographic locations work.”

VersaCold initially subleased 271,880 square feet of temperature-controlled space from Sobeys for 12 years, with an April 1, 2017 commencement, in October 2016. It subleased the balance of the space in February 2017. VersaCold then negotiated a new head lease with Triovest two months later. It will start in July 2029 and last for eight years, with multiple renewal options.

It represented one of the Greater Toronto Area’s largest lease transactions of 2017 by square footage and the largest by value, at $88 million of net rent, according to Gilbert.

“It added 20 per cent new freezer capacity to the public refrigerated warehouse market after no new capacity above 50,000 square feet had been added since 2004,” he said.

VersaCold invested $60 million to redevelop the now state-of-the-art facility, so it was imperative that it have control over the property for at least 30 years.

The facility will accommodate an expanded partnership with Nestlé and house VersaCold’s warehousing operations, transportation management and transportation solutions teams. Customers storing product at other sites in the GTA, Montreal, Winnipeg and Calgary will be able to consolidate in the new facility, which will reduce the number of shipments to retail customers, save time and money and also reduce the environmental impact.

VersaCold will employ approximately 150 people at the facility, which has a 40-foot clear height and one truck-level door for every 4,207 square feet. The building will be able to handle 51 million pounds of frozen meals annually, and approximately 30 inbound and 60 outbound loads per day. It has the capacity to position 70,000 pallets within 19.1 million cubic feet.

VersaCold will have the ability to further automate and implement enhanced processes when necessary.

Cold-storage and freezer facilities can use three to four times as much power as a non-refrigerated warehouse of the same size, so sustainability was also taken into consideration in the VersaCold building design.

All of the lighting was changed from fluorescent to motion sensor LED. Loading docks were refitted with airtight seals to lower heat gain and energy costs. The facility will use reclaimed waste heat from the refrigeration system, which will require no fuel or electricity, to prevent frost heave on floors.

The Milton location has easy access to Highways 401 and 25, rail lines, and international airports in Toronto and Hamilton. Its proximity to New York and Michigan also made it desirable to VersaCold.

The facility has parking spaces for 361 cars and 129 trailers.

Gilbert said there’s land around the building to accommodate an additional 50,000 to 100,000 square feet of space if it’s needed for future expansion, which isn’t a priority at this stage.