Self-storage players such as Strategic Storage Trust II, Inc. (SST II) are looking to capitalize on trends such as Toronto’s condo boom, where downsizing empty-nesters or those starting a family suddenly face a space crunch. 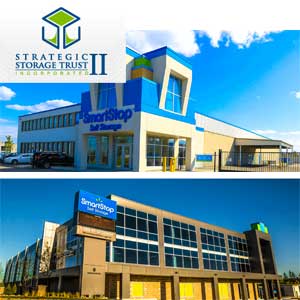 In the downtown core, however, finding any suitable space for the right price is extremely difficult, said Michael Schwartz, Strategic’s chairman and chief executive,

“We are going to probably buy more property outside of the core and hopefully position ourselves for some transactions later down the line.”

Given the current mom-and-pop nature of the self-storage business in Canada, the REIT is well-positioned to be an acquirer, but has found opportunities few and far between so far in the GTA.

“What we are finding is a lot of owners are very happy with their performance. Some are interested, as you can see with the sales that we have just had, but some people that we talk with, they like to hold. . . .

“They might not be sellers today, but maybe they are sellers in three years, five years, seven years.”

Strategic Storage acknowledges a handful of established players in the market, but believes its well-established brand, operating platform and technology will set it apart from competitors. In particular, Schwartz said its pricing strategy is a key differentiator.

That did not go over well when SST II came into the market, he said. “We had a lot of people calling me personally in Toronto saying, ‘What are you doing, why are you posting that? That is not how we do business here.’ ”

The company, however, recognizes its product is a commodity, despite nice signage and feel-good solar panels on the rooftops of some facilities. “We’re all the same in that we are renting garage space. Our 10-by-10 is probably the same as everyone else’s 10-by-10,” he said.

Schwartz said the Toronto market is ripe for expansion not simply because residents’ garages and basements are bursting with junk to store, but because of not so obvious drivers.

“Especially in the Toronto area, we have found a lot of entrepreneurs.” He noted that has pushed demand for the executive offices the REIT rents at some of its facilities.

“They are close to 90 to almost 100 per cent filled with people who are incubating their businesses . . . they can’t afford traditional office space. In addition, they are using our storage as the incubator for whatever business they are doing – an online business where they are fulfilling inventory.

“People don’t want to form their company out of the garage anymore like Apple or Hewlett Packard. They want to get out of the house.”

Add trades such as plumbing, electrical and construction types who would rather store equipment and supplies securely at a facility rather than at their residence.

For non-business users, self-storage is defined and driven by the “4Ds,” namely death, divorce, downsizing and dislocation. “People don’t wake up and say, ‘I need storage.’ There is some life event,” said the storage REIT chief.

Read the first part of this article from April, 7, 2016 in Property Biz canada at: Strategic Storage eyes 100 GTA locations