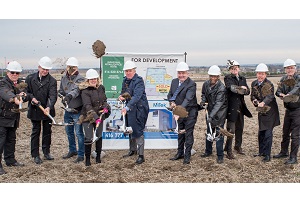 The sod is turned for the first industrial / commercial development at a 95-acre Highway 400 site which has been held by Strathallen Capital in Bradford-West Gwillimbury, Ontario. (CNW Group/Strathallen Capital)

The company launched site servicing of the land in Bradford-West Gwillimbury and has sold two parcels that will be developed in 2018.

“The 95-acre site will be levelled, a new road constructed, and the land subdivided into 15 saleable land blocks, each being fully serviced,” said Strathallen vice-president of development Grant Pretorius. “The work will be completed by July 2018.”

Strathallen purchased the land for an undisclosed price on behalf of investor clients in 2007. It sits at the southwest corner of Highways 400 and 88 at the gateway to Bradford and Bond Head, north of Newmarket and south of Barrie.

The Province of Ontario designated it, along with an additional 805 nearby acres belonging to other owners, for employment and commercial use in 2009.

Strathallen’s is the first of these lands to come to market. Pretorius believes others will follow in short order due to the hot industrial and commercial real estate markets in the region, its expected population growth, and the local municipality’s eagerness to work with developers.

“It has a broader zoning than the rest of the 900 acres of industrial and commercial land, by also permitting hotels and industrial supportive retail uses,” Pretorius said of Strathallen’s property.

“With the widening of Highway 400 currently underway, and incredible increases in land prices in the Greater Toronto Area over the past 18 months, we have benefitted from buyers seeking accessible, well-priced lands on a 400-series highway. We are receiving interest from buyers for all uses within the current zoning.”

MiTek Canada, a global supplier of engineered products and services for the building components industry, has acquired a 15-acre parcel fronting Highway 400. It plans to start construction of a 240,000-square-foot premises in the spring that’s targeted for completion in early 2019.

Strathallen will announce the purchaser of another 2.5-acre parcel of land fronting Highway 400 in the spring. Pretorius said the development timeline for that property will be similar to MiTek’s.

The prices of the two parcels sold by Strathallen weren’t disclosed. While the Toronto-based real estate management company has the in-house capability to develop the remaining land, Pretorius said its intention at this point is to sell it all.

Strathallen was founded in 2003 and has approximately 8.9 million square feet of retail real estate assets under management valued at around $1.7 billion. It manages and operates four private closed-end funds and provides asset management, property management and strategic advisory services to institutional and high net worth investors.