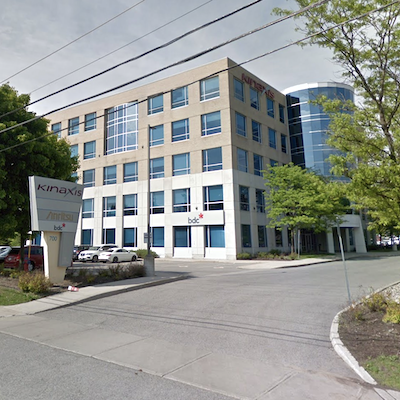 The project is the third major office building announced in Ottawa in recent months and the second in Kanata, where the commercial real estate sector is benefitting greatly from the city’s equally booming technology industry.

Construction is expected to begin in the spring at the Kanata West Business Park property, with occupancy in late 2021.

“We’re thrilled. It’s been a long time planning but we are thrilled with the result and obviously looking forward to moving in,” Kinaxis CEO John Sicard told RENX, “though it does feel quite far away from now.”

Like other Ottawa-based tech firms such as e-commerce giant Shopify, Calian, SurveyMonkey and others, Kinaxis is experiencing rapid growth.

Kinaxis “busting at the seams”

It has cumulative average revenue growth in excess of 20 per cent per year since going public in 2014. In the same time period, its Ottawa employee numbers have doubled to about 400 people, while its international workforce has ballooned by 200 additional workers.

“One of the challenges being in the space we are in now is you are limited to meeting space, there is no real collaboration space left,” Sicard said of the company’s current 64,000-square-foot headquarters.

“Any space left has been occupied by desks. As you can appreciate, you get to 400, 500, 600 employees and you don’t have any real food service whatsoever; it’s just inappropriate for a company this size not to be able to host your own employees for lunch.”

The 30-year-old company was established in Kanata. In response to the wishes of its employees, management decided to both stay in the community, and in the same relative geographic area as its current head office.

“We’ve been busting at the seams for a while now,” said Kinaxis’ chief human resources officer Megan Paterson. “We’ve been creative, but now we are really running out of options. We looked at other opportunities and we thought that design-build would be a good one for us, especially for our headquarters.”

The company solicited proposals for a new office in the Kanata area and selected Taggart’s bid. The company will construct a five-storey office facility with large, 30,000-square-foot-plus floorplates. It will include a food services area, collaborative spaces, a gym, 550 outdoor parking spaces, bicycle parking lot, electric-vehicle charging spaces and access to both local public transit, the adjacent Hwy. 417 and Ottawa’s extensive bike trails network.

The 5.73-acre site, at the corner of Campeau Drive and Palladium Drive., is adjacent to a Tanger Outlets retail site and just across Hwy. 417 from the Scotiabank Place, home to the NHL’s Ottawa Senators. It is just across the highway from Kinaxis’ current home at 700 Silver Seven Dr.

The Taggart proposal had one more key attribute, the ability to add a second linked tower at the site for another 100,000 square foot of future expansion space.

In terms of design, it is still early days but both Paterson and Sicard said they expect to meld open concept office elements with some traditional themes, including private work spaces.

Mix of private and open-concept spaces

“Our employees, they still appreciate the privacy to work,” Sicard said. “They want more open concept collaboration areas, they want social spaces. So we’ll see where this all ends up, but those are the three key factors.

“Having said that, one social space isn’t necessarily the answer. We’ve seen great areas where they pepper social spaces on every floor. You can go have a coffee, sit down and chat and you don’t have to all necessarily congregate in one spot.

“We work on some pretty challenging software problems and it is one of the things that keeps our employees really jazzed about Kinaxis. We’re pretty excited about what this space is going to be.”

From Taggart’s perspective, the Kinaxis announcement offers a major addition to its Kanata West park.

“We’re thrilled to have Kinaxis as our anchor tenant in the Kanata West Business Park,” said Derek Howe, the vice-president of  development at Taggart Realty Management, in a release. “They are a vibrant and growing technology company with deep, local heritage and a growing global presence.”

The development is the latest in a string of major announcements in Ottawa during the past nine months.

Dream and Theia Partners announced in June a major government lease which will anchor an eight-storey, 185,000-square-foot office campus at the Zibi development site in Ottawa/Gatineau. That project is slated to begin construction in the fall.

The federal government agency will take 158,000 square feet in that building, which was first reported by RENX in April. The Zibi site also features two smaller, brick-and-beam renovation structures which, together, will contain about 55,000 square feet of office and commercial space.

In total, these projects represent about 500,000 square feet of new office space for the city. As a long-time Ottawa businessman Sicard said the fact a major portion of this is driven by the tech sector is a point of pride.

“I’ve been here for 25 years and it’s just like Ottawa, this used to be Silicon Valley North and somehow that brand faded. I don’t know, but maybe it’s being polished a little bit now,” he said. “When any tech company in Ottawa does well, I celebrate. Let me tell you why, it puts Ottawa on the map. We are building our own, Canadian giant but it is wonderful to see other firms doing well.

“It is great to see Ottawa-based technology serving the largest manufacturers in the world. It is something to be proud of.”