Cadillac Fairview has submitted an updated development plan for The Crystal at Waterfront Square,... 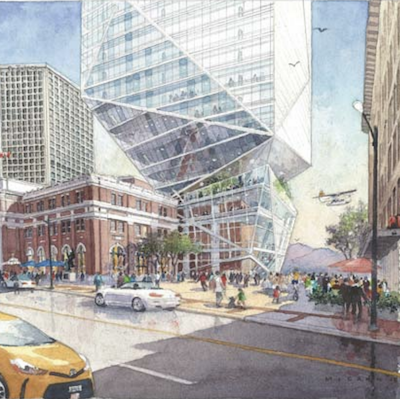 Cadillac Fairview has submitted an updated development plan for The Crystal at Waterfront Square, a proposed 26-storey downtown Vancouver office building which has been on the drawing board for four years since an original proposal was rejected by the city.

If the updated design for the project is approved, CF says shovels could be in the ground at 555 West Cordova before the end of this year. The latest iteration of the distinctive design would deliver more than 500,000 square feet of office space to the tight downtown Vancouver office market.

It would have a maximum building height of 376 feet and feature a public walk-through on the ground floor and a public viewing terrace on the fourth level.

In a release Wednesday morning, CF says the building has been reconfigured to “minimally” touch the overall footprint of the current site, a ground-level parking lot which sits beside the city’s historic downtown train station.

The previous design placed the building directly beside the station and was criticized for towering over the historic structure.

The revision retains the distinctive base, which expands outward as the building rises, but changes the orientation of the structure and sets it back further from West Cordova Street.

“The reconfiguration allows for 85 per cent of the current surface parking lot to be repurposed as an open civic square, enabling the community to enjoy unimpeded harbour and mountain views,” the release states.

CF is also promoting the sustainability features of The Crystal at Waterfront Square, including:

* no new parking stalls created for the project;

* it will be constructed targeting WELL and LEED Platinum certifications.

“The Crystal at Waterfront Square is another example of Cadillac Fairview’s commitment to designing and operating a world-class building that contributes to a vibrant and sustainable city,” said Tom Knoepfel, CF’s senior vice-president western portfolio, in the release.

“Cadillac Fairview is and has been a long-standing developer, owner, and manager of both retail and office properties in Vancouver and we’re proud to be carrying on that tradition with this landmark development that will bring to market much-needed class-A office and commercial space in downtown Vancouver.” 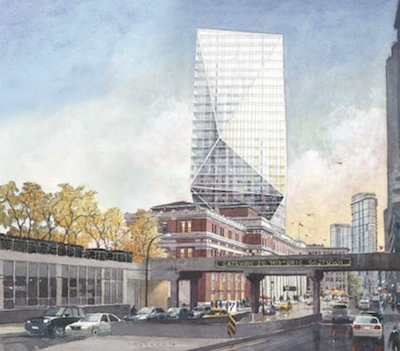 Under the site’s existing zoning, the building use is permitted, but the design requires the approval of Vancouver’s Development Permit Board.

CF said work on that project will begin in the coming weeks.

Including The Crystal announcement, and the concurrent redevelopment of the CF Pacific Centre rotunda (located at West Georgia and Howe Streets), CF says it is investing over $600 million in its Vancouver properties.

CF is the largest commercial property owner in Vancouver, with over four million square feet of retail and office space.

Its last major development project in Vancouver transformed the former Sears box at CF Pacific Centre into a mixed-use property attracting global brands such as Nordstrom, Microsoft and Sony Imageworks.

Cadillac Fairview is one of the largest owners, operators and developers of office, retail and mixed-use properties in North America. The Cadillac Fairview portfolio is owned by the Ontario Teachers’ Pension Plan and includes investments in retail, mixed-use and industrial real estate in Brazil, Colombia and Mexico.