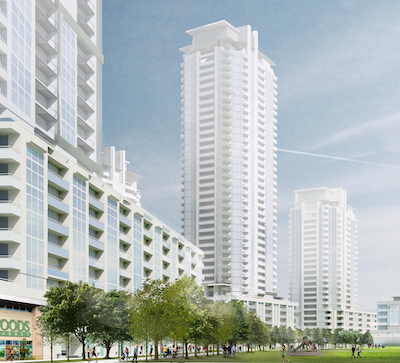 Timbercreek has a multi-billion-dollar proposal to transform the South Ottawa community of Heron Gate. (Courtesy Timbercreek)

A multi-billion-dollar development will transform South Ottawa’s Heron Gate community and triple or even quadruple its population during the next two decades.

“The vision really is for a vibrant, diverse, mixed-use community,” said Colleen Krempulec, Timbercreek’s executive director of marketing, during an interview with RENX. “Our estimate is that the approximate population of Heron Gate village today is around 5,000 people, whereas at full build-out it might be 15,000 to 20,000 people.”

A secondary plan proposal for the 40-acre Heron Gate development was filed to the City of Ottawa in April.

Roughly “90 per cent of it will be net new additions, and about 10 per cent of the 5,500 (units) will be replacement,” Timbercreek’s vice-president of real estate investment management Paul Popovici said.

The plan details five blocks of residential building, “which will include townhouses, mid-range apartments, high-rise apartments, live-work units, commercial space, and amenities,” Krempulec said. It features “some great improvements and additions, as far as public park spaces and parkettes and green connectors.”

While that means some redevelopment at the site, Popovici said most will involve wood structures which “will eventually be replaced over time.” Timbercreek plans to retain five existing, concrete construction multi-residential towers which are already in the community.

The overall Heron Gate secondary plan is in the hands of the City of Ottawa’s urban design review panel, although work is underway on one phase which received approval a couple of years ago.

“There are also three mid-rise buildings that began construction in 2016, that will be ready for occupancy this fall,” said Krempulec. Those six-storey multi-res buildings at Heron Road and Sandalwood Drive contain almost 350 apartments, as well as ground-floor retail.

That project alone is valued at about $120 million.

Timbercreek Asset Management was founded in 1999 and is an active investor, owner and manager of global real estate and related assets. Timbercreek Communities is a leading operator of multi-residential communities across Canada, and has a significant presence in the Ottawa market.

The company assumed ownership of Heron Gate in 2012. Since then, more than $50 million has been spent on retrofitting existing apartments and upgrades to amenities.

“It’s always been our vision to invest in the community so that it’s viable and sustainable well into the future,” said Krempulec, adding “we saw an opportunity to provide new housing stock to the community.”

During its first phase, the company faced criticism for so-called “renovictions” from aging, existing housing. In response, it has decided to construct new phases in such a way that residents being displaced will have newer units to move into within the community.

“Any tenant there, or any occupied townhomes that will be replaced in the future, will have a chance to move into new, comparable units before those are knocked down,” Popovici said.

Affordable housing will be a significant portion of the development, though it’s unclear how many units will be deemed as such. Timbercreek plans to designate up to 20 per cent of the 5,500 units as affordable – meaning up to 1,100 new units.

“I think it’s safe to say that there will be a significant rental component,” said Popovici. “We just don’t have the specific number of units at this point. That will all be dependent upon us working through the process with the City of Ottawa.”

“From studio units to one-bedroom, two-bedroom, three-plus-bedroom units for singles and families alike, and everything in between,” Krumpelec said. “But, we haven’t yet got to the point in the planning process where we’ve specifically outlined that level of detail.” 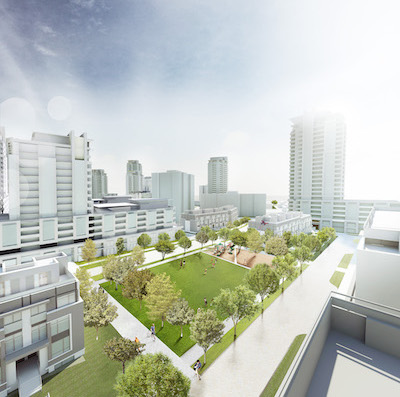 “We think that the renderings and the vision look beautiful, and we are confident it will look beautiful when it comes to life,” Krempulec continued. “There’s nobody out there who doesn’t want to live in a community that doesn’t have a lot of green, outdoor space for walking and for playing, for families and those who own pets.

“So it is a big, important part of the community plan.”

Guiding principles of the development include creating a vibrant community identity, prioritizing pedestrian and multi-modal transportation and forming a sustainable and socially responsible community.

The plans also facilitate better movement in and around the community, she said.

“(The plan) seeks to improve the different ways people can move around in the community, so there is a drastic improvement and investment in new pedestrian pathways, as well as new dedicated bike pathways,” Krempulec explained.

“So it really will be a multi-modal transportation community and one that promotes and encourages alternative transportation uses beyond just main streets with vehicles on (them).”