Edmonton International Airport (EIA) was the first Canadian airport to receive a LEED Gold certification, and its air terminal building followed that distinction in September by winning a Building Owners and Managers Association (BOMA) of Canada TOBY Award for corporate facility. 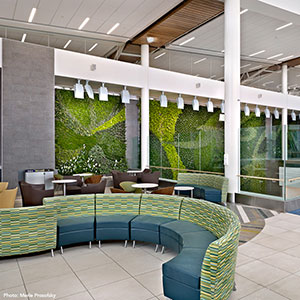 EIA is owned and managed by Edmonton Regional Airports Authority (ERAA). The facility was built in 1960 and has undergone three major expansions in the last 20 years. It supports more than 12,000 jobs and its passenger traffic has grown to become the fifth most in Canada. A 2012 expansion added 480,000 square feet of space to the BOMA BEST Gold-certified terminal as well as nine new gates, bringing the total to 26.

The three-storey, 587,602-square-foot air terminal building is home to one of Canada’s largest indoor vertical gardens, with a 1,400-square-foot living wall consisting of 8,000 different plants.

“The living wall provides both aesthetic and environmental benefits to the building space,” said Valente. “In addition to being inspired by cloud formations, the living wall cleans the air of the terminal building by absorbing toxic indoor air pollutants.”

EIA has a dedication to sustainability and in 2014 became one of two Canadian airports to report using the internationally recognized Global Reporting Initiative framework.

EIA has adopted a strategy to be carbon neutral by 2020, and it reduced its average energy intensity by 4.3 per cent between 2014 and 2015. It’s planning a co-generation facility to produce electricity and heat and reduce the carbon footprint by moving from coal to natural gas as the input fuel source for its electrical power. This will also lower the cost of heating and powering the air terminal building when it’s completed in 2018.

EIA is also replacing older lights with energy-saving, longer-lasting LED fixtures. Older inefficient windows have been replaced with triple-pane windows. Heat recovery systems have been installed. A new reservoir cleaning technique that will save about 4.5 million litres of water over three years has been implemented.

EIA provides professional development opportunities and internal job-related training and equipment to all employees as part of its communication, education and safety initiatives, which include mandatory security and customer service training for ERAA staff and tenants.

“Our property management department keeps in regular contact with all of the tenants and has an annual tenant information session,” said Valente. “There are also monthly mixers hosted by different tenants and the Airport Authority to get to know the many people that make up EIA.”

EIA is involved in more than 100 community partnerships, including Dreams Take Flight and United Way. The fifth annual EIA Charity Golf Classic raised $200,000 for Youth Empowerment & Support Services, Riseup House and the Leduc & District Food Bank. The tournament has raised more than $620,000 for families, women and youth in the region over the last five years.