Toronto-Dominion Centre on top of its game at 50

Toronto’s iconic Toronto-Dominion Centre has just turned 50, but it hardly needs to worry about g...

Toronto’s iconic Toronto-Dominion Centre has just turned 50, but it hardly needs to worry about going through a midlife crisis. 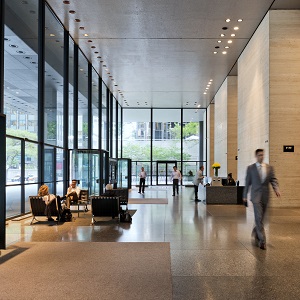 Instead of kvetching about old age and retirement, or buying the commercial real estate equivalent of a convertible, the massive mixed-use development in the centre of Toronto’s financial district has been basking in international acclaim this year.

TD Centre recently won The Outstanding Building of the Year (TOBY) Award from the Building Owners and Managers Association (BOMA) International. BOMA describes the awards as the commercial real estate industry’s highest honour for excellence in building management and operations.

And 222 Bay Street, one of six office towers in the complex, has become the first existing building in North America to achieve WELL core and shell Gold level certification. The WELL standard focuses on the performance of buildings relating to air, water, nourishment, light, fitness, comfort and mind.

When buildings like TD Centre have “the right design principle and forward-thinking approach, (they) can continue to be relevant and, more importantly, industry-leading.”

Design has “stood the test of time”

Although TD Centre is “not out there pursuing awards or glory,” Hoffman says the TOBY Award recognizes the “care and due diligence that we have invested in this property over the years.” And it reflects how architect Ludwig Mies van der Rohe’s design was timeless and has “stood the test of time.”

It also differentiates the property “in a very competitive market.”

The first building in TD Centre opened in 1967, giving a new look to the city’s skyline. Mies’ original plan was for two towers and the banking pavilion at the corner of Bay and King Streets. But in the decades after his 1969 death, three more towers were added.

The complex now has 4.3 million square feet of rentable space, making it the biggest commercial office complex in Canada and within the top three or top five in North America, Hoffman says. Some 21,000 people work in TD Centre, and 50,000 pass through it daily. “It’s a city within a city.”

Until June, the occupancy rate was 98 per cent, when EY (Ernst & Young) vacated its space in the 1992 tower – the final building in the complex – that was built over the old Toronto Stock Exchange. What used to be the EY Tower is now simply 222 Bay Street, with major tenants including TD Bank, York University, Microsoft Canada and Royal Bank.

Retail occupancy at 96 per cent

The retail complex underground has an equally impressive occupancy rate of 96 per cent.

“Occupancy levels and maintaining competitive market rents and tenant satisfaction are some of the outcomes of the way that we have managed the buildings,” says Hoffman.

Achieving the WELL certification at 222 Bay Street required a number of upgrades, he says. The HVAC system, specifically the air filtration system, was updated. Stairwell lighting was improved and artwork was added to make the stairs more inviting and engaging to use.

A stairwell fitness program was launched. Campaigns were conducted on healthy eating and healthy food choices at the TD Centre. Daylight glare and exterior noise were reduced and more natural lighting was introduced. Bicycle repair clinics were held. Only green cleaning products started to be used.

Now that WELL certification has been achieved at 222 Bay Street – the newest tower – the goal is to achieve certification for the original building at TD Centre, 1967’s TD Bank Tower at 66 Wellington St. W. “That gives us a good breadth and range of achieving certification from our newest to our oldest towers.”

Hoffman says that since 2009, TD Centre has had an ongoing occupant engagement program that looks at wellness, human health and productivity through a number of initiatives that work hand-in-glove with the WELL standard.

The 23rd floor was certified at the WELL Gold level for commercial interiors after 25,000 square feet of space was renovated over 18 months. Changes included new water filtration systems, ergonomic chairs, and the establishment of a “tranquility lounge.”

Hoffman says a number of other TD Centre tenants are interested in pursuing similar certification.

Meanwhile, owner Cadillac Fairview is in the midst of a multi-year, $250-million capital reinvestment program at TD Centre to shepherd the property through graceful middle age. Work started in 2009 and the majority will be completed in the next three to four years.

The goal “is to give them a second life, to allow these properties to perform at their highest standards and to maintain our best-in-class position in the industry.”

Main lobbies have been refreshed and upgraded. On many floors, the floor-mounted induction units have been replaced with ceiling-mounted chilled beams. Washrooms have been upgraded. The exterior plazas have been rehabilitated with higher-quality granite installed and membrane and plumbing infrastructure changed.

Details matter, right down to the paint

In addition, the iconic black exterior facades of the TD Centre buildings had started to fade. To ensure they remained true to the original colour, “we worked with a consultant out of Chicago that specializes in Mies van der Rohe paint, if you can believe it,” Hoffman says. “That’s an example of where we’re taking meticulous care and (that) we understand Mies’ principles and we wanted to stay true to his principles.”

“One of his famous quotes is ‘black is a noble colour,’ so we wanted to make sure that we got the right black paint for the exterior of the building.”

One tower has been repainted and a second tower is more than 90 per cent complete.

Hoffman, who has been the GM of TD Centre since 2010, says Mies introduced the modern workplace to Canada in the 1960s. “He envisioned a complex where people could live, work and play.”