Toronto’s West Don Lands is one of only 13 development projects to receive the Urban Land Institute’s prestigious 2017-2018 Global Award for Excellence. 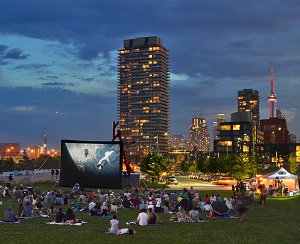 (Marine Gateway, a prominent mixed-use development on the Canada Line SkyTrain route in South Vancouver, was the only other Canadian winner and was featured in Tuesday’s Property Biz Canada newsletter.)

“West Don Lands is a complex project that articulates creative real estate development that capitalized with a vision the Pan Am Games as an early catalyst,” said Wendy Rowden, chair of the jury that decided the winners.

“The ensuing deployment of the development hinges on a versatile park and the creative use of the area context to develop amenities, as well as cultural engagement.”

The project began when Waterfront Toronto, a tri-government agency and master developer of the site, undertook to transform 79 acres of provincially owned brownfields in the eastern part of Toronto’s downtown in 2003.

The 42-acre West Don Lands project was designed through extensive community engagement and collaboration between government and the private sector. It resulted in a plan for a pedestrian-focused community built around parks and included: housing for people of all ages, income levels and abilities; public transit access; retail; community amenities; and stringent sustainability requirements.

Urban Capital’s River City and the Toronto Community Housing Corporation’s buildings for seniors and families were developed first, after which development was greatly accelerated by Toronto’s hosting of the 2015 Pan Am/Parapan Am Games.

The housing includes an above average number of family-sized units. Twenty per cent of the units are designated as affordable rental and an additional five per cent as affordable ownership. Each unit is part of a global-leading, ultra-high-speed broadband community network.

“The temporary housing for the athletes was envisioned to be transformative and West Don Lands has made the transition very successfully in a complex context of multiple developers and designers,” said Rowden. “It is an exemplary public-private partnership effort.

“The project addressed the regulatory framework with innovation before moving forward with more extensive development, and demonstrates best practices that can be replicable elsewhere.”

Parks, art and other amenities

The 18-acre Corktown Common park is positioned atop a flood-protection landform that protects 519 acres of the city. This essential public infrastructure was used to deliver a popular community amenity and unlock the area’s development potential.

The Front Street Promenade, a linear park that constitutes the spine of the neighbourhood, is programmed with curated public art installations and linked to the district’s secondary network of mews, courtyards and pathways to create a healthy, walkable and integrated new community.

“The public realm and public art was considered from the start rather than as an afterthought,” said Hogan. “The neighbourhood is home to the first community-scale public art master plan in Canada, offering a cohesive collection of seven unique public art installations, each reflecting the area’s history and meaningfully integrated into public spaces.”

Waterfront Toronto submitted the application for the award. Almost 200 were submitted in total, with 25 selected as finalists and 13 as winners.

“Waterfront Toronto worked closely with our project partners to develop a compelling submission for the award on behalf of the entire project team,” said Hogan.

The other team members are:

There’s still quite a bit to come in West Don Lands, according to Hogan.

“Dream Kilmer has two more market condominium projects underway. We’re working with The Rekai Centres and Options for Homes, which together have announced the construction of a new long-term care home and affordable home ownership condos on the northwest corner for Front Street and Cherry Street. We’re also working with Anishnawbe Health Toronto on a future development in the community.

“In addition, we’ve been working with the province and the city on the recently announced land offering for purpose-built rental that includes a large portion of fully integrated affordable rental units.”

Global Awards for Excellence have been presented by the Urban Land Institute since 1979. They recognize the full development process of a project, not just its architecture or design, although these elements play an important role.