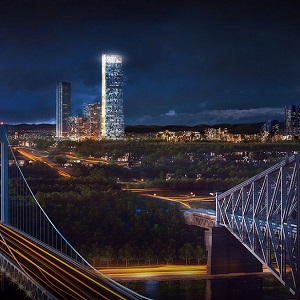 Le Phare is a 65-storey tower planned for Quebec City by Dallaire Group. It would be the tallest office tower in Canada outside Toronto. (Image courtesy Gensler Architects)

The mixed-use project includes an 800-foot office tower that would become the tallest office building in Canada outside of Toronto.

Le Phare will serve as the launch pad for the densification of Laurier Blvd., says Russell Gilchrist, principal and tall buildings practice area leader at the Chicago office of architectural firm Gensler.

“We’re hoping it will act as a catalyst” for future development of Laurier Blvd, says Gilchrist, who was speaking at the recent Quebec City Real Estate Forum.

Gensler, which has been tapped by Dallaire to build Le Phare, describes itself as the world’s largest architectural firm, with 5,500 employees in 13 countries.

Le Phare (phare means lighthouse) would be built on the site of the former Hôtel  Gouverneurs which was demolished in 2014. The area of the Sainte Foy-Sillery-Cap Rouge borough serves as the western entrance to Quebec City.

Aside from the main tower, the 2.7 million-square-foot project would include three other towers of 591, 361 and 197 feet. Construction would extend over a 10-year period.

The first version of Le Phare was unveiled in 2015 and an updated version was made public in 2016.

Public hearings on the project were slated for last year, but with the municipal elections approaching, Quebec City mayor Régis Labeaume announced in May 2017 the consultations would be put on hold. A new date for public hearings has not been set.

While Quebec City officials have spoken positively about the project, it has yet to receive the official go-ahead.

Le Phare requires zoning changes – building limits in the area are currently set at 29 storeys – and concerns have been expressed about the traffic congestion the project would cause on Laurier Blvd.

It will be centred by a public square containing a skating rink in winter and fountain in summer similar to New York City’s Rockefeller Center. To help keep the site lively in the evenings and on weekends, there will be a 750-seat multimedia concert hall.

“What we’re trying to do is create a sense of place with Le Phare,” Gilchrist says.

Plans call for an observation deck on the top two floors of the 65-storey building that will provide a 360-degree panoramic view and a restaurant on the top floor.

There will be a residential tower for senior citizens, condos, rental units and a 150-room hotel.

Along path of Quebec City tramway

Le Phare would be on the path of Quebec City’s proposed new tramway system, which would run along Laurier Blvd.

Since Quebec City is a low-rise city for the most part, Le Phare is “going to be a big deal in Quebec” and a big deal in Canada, says Gilchrist. The main tower of Le Phare will be identifiable from anywhere in the city, he says.

But, height is relative, and from a global perspective the project is small, Gilchrist notes. “At 800 feet, Le Phare probably wouldn’t make the top 500 or 600 in the world.”

Groupe Dallaire has been involved for 30 years with the development of the Laurier Blvd. business area. The company owns more than 153 million square feet of land in the Quebec City area and is one of the largest owner-developers in the city.

Among its other planned projects in Quebec’s capital, is a major residential project in South Shore Lévis and the Espace d’innovation Chauveau, a new industrial park east of Autoroute Henri IV.