Two years ago, Crown Communities had plans to launch a townhome project called Towns at Kingston... 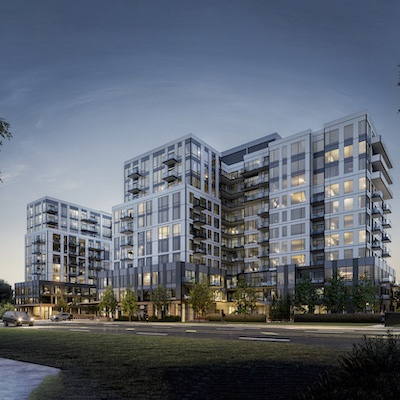 Narrative Condos will be built on a Kingston Road site in Toronto which was originally intended for a townhouse development. (Courtesy Crown Communities)

The company launched sales earlier this month for a double-tower mid-rise development called Narrative Condos on the same 7437 Kingston Rd. site in Scarborough.

“The city wanted condos and the market wanted condos, so we spent some time on the townhouses and unfortunately wasted some money doing that, but eventually changed it over to condos because of the sheer demand for it.”

Narrative Condos’ site provides convenient access to Highway 401 and Kingston Road (Highway 2), a GO Transit station and various bus routes. Nature lovers will appreciate the location next to the expansive Rouge National Urban Park and its hiking trails, but still being able to walk to neighbourhood restaurants and retail.

Narrative Condos will offer 422 units in the two 11-storey buildings.

The mix is 65 per cent studio and one-bedroom units, 25 per cent two-bedroom units and 10 per cent three-bedroom units. The average price is approximately $670,000, ranging from the high $300,000s to $1.2 million. Maintenance fees will be 60 cents per square foot.

Kirkor Architects and Planners is the architectural firm and Pulsinelli is the interior designer for Narrative Condos, which will feature more than 18,500 square feet of indoor and outdoor amenity spaces.

These include: car-sharing; co-working spaces; a yoga studio and wellness centre; a kids’ play studio and playground; a party room with dining and lounge areas; and a games room.

Keeping prices and costs in line

Crown is focused on making floor plans for its units as efficient and liveable as possible while keeping prices attractive for first-time buyers and young families.

“If I told you three years ago that we’re going to be selling for more than $1,000 per square foot in Scarborough, you’d say ‘You’re crazy,’ ” Taverna said. “What we’re doing as developers now is trying to make suites as efficient as possible so you get a lot out of them.”

Taverna said although condo prices have risen, profit margins for developers haven’t gone up since 2017 because construction costs and development charges have increased so much over the past few years.

Crown is working on obtaining its building permit from the city while simultaneously launching sales for Narrative Condos.

Taverna declined to comment on early sales, but said: “There’s a good amount of demand for the project.”

The latest anticipated construction start date is September, according to Taverna, who is shooting for occupancy in the autumn of 2025.

Concord, Ont.-based Crown Communities, which formed in 2014, has three other projects in and around the Greater Toronto Area.

Construction began in January 2020 on Winlock Towns, which features 10 traditional and 20 stacked townhomes on Finch Avenue just west of Bayview Avenue in North York. The infill project sold out and occupancy started more than a month ago.

Construction is well underway at Greenwich Village Towns, which features 28 traditional and 125 stacked townhomes on Sheppard Avenue West near Allen Road and the Sheppard West subway station in North York.

The infill project sold out, with first occupancy expected in September and final occupancy next April.

Crown plans to launch sales for Yonge & Mapleview Condos, near the Barrie GO Transit station at Yonge Street and Mapleview Drive East, in mid-2023. A 2024 construction start is anticipated, with completion of its two- and three-bedroom homes to follow in 2027 or 2028.

Steve McLean Commercial Transactions Toronto / GTA Apr. 14 2022
Steve McLean Business reporter
Steve is a veteran writer, reporter, editor and communications specialist whose work has appeared in a wide variety of print and online outlets. He’s the author of the book Hot Canadian Bands and has taught reporting to college students. He is based in Toronto.