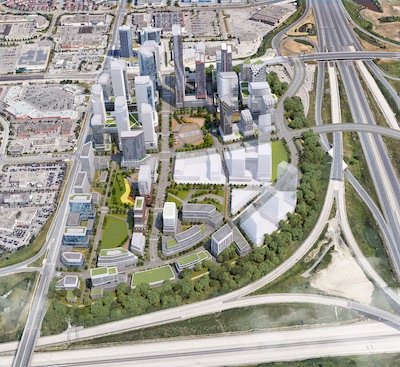 RioCan REIT is proposing up to 25 towers and buildings and over 10 million square feet of redevelopment at its Colossus Centre in Vaughan, in the northern Greater Toronto Area. (Courtesy RioCan)

RioCan REIT has ambitious long-term plans to redevelop its 61.7-acre Colossus Centre shopping centre in Vaughan with up to 25 towers and buildings comprising over 10 million square feet of housing and retail.

Colossus Centre is located north of Toronto and surrounded by Highway 400 to the east, Highway 7 to the north, Weston Road to the west and Highway 407 to the south. The existing unenclosed shopping centre has more than 60 units and approximately 570,000 square feet of leasable retail area.

“It’s in a very, very busy node of the city that the city is investing in with all of the work that’s being done along Highway 7 and the VMC (Vaughan Metropolitan Centre),” RioCan (REI-UN-T) development vice-president Anton Katipunan told RENX.

Colossus Centre is most recognizable by the distinctive Cineplex Cinemas Vaughan movie theatre, which is shaped like a flying saucer. Other major tenants include HomeSense, Marshalls, Bed Bath & Beyond, Staples and Golf Town.

It’s shadow-anchored by a Costco and there’s a Petro-Canada gas station at the northwest corner which aren’t part of the 61.7 acres, though they’re thought of by most people as being part of Colossus Centre and are expected to remain.

“We’re really excited about converting to the highest and best use,” said Katipunan. “In our opinion that is a retail-focused mixed-use development that we want to work with the city, the community and the retailers that are there to figure out what’s the best solution that will meet the needs of that community.”

Katipunan believes the green space and parkland will appeal to future residents since the site is currently full of asphalt and parking lots. The residential component of Colossus Centre will likely include both purpose-built rental apartments and condominiums.

“As we go through our planning, what we want to do is understand what the market is dictating and what the best outcome is,” said Katipunan. “We’re looking to satisfy what the community is going to benefit from the most as well as from our unitholders’ standpoint.”

Colossus Centre’s location and proximity to major roads and public transit should appeal to retailers, its developer believes, as should plans that will encourage pedestrian movement through the addition of new public and private roads with sidewalks.

It’s still up in the air whether Colossus Centre will also include an office component. 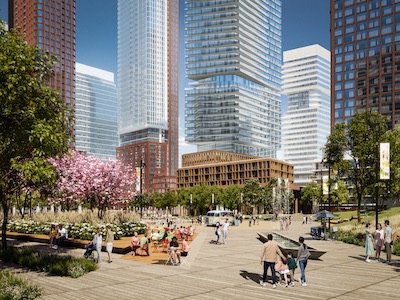 A rendering of some of the open space, surrounded by towers, proposed as part of the Vaughan Colossus Centre redevelopment. (Courtesy RioCan)

RioCan has made an application for an official plan amendment and is hoping to apply for zoning for Phase 1 of the redevelopment sometime this year.

The first phase will include two residential towers with a podium, according to Katipunan.

“We’re hoping that within a five-year time frame we’ll have an idea of when construction will start,” said Katipunan.

These are large and ambitious plans and one might think bringing in partners may be necessary to bring them to fruition, but Katipunan said it’s too far out to think about at this point.

“We always want to make sure that we’re putting our best foot forward, and sometimes that involves bringing in a partner. We’ve been building our team up internally to be able to tackle a project like Colossus. The projects that we’ve achieved over the past several years are testament to what we can produce.

“Colossus, at this scale, is not something that you come across on a regular basis. We’ve been hard at work on building the right expertise in-house and we’re confident that we could approach this project on our own.

“But as the planning process evolves and the market dictates what we want to put there, we would definitely be open to considering partnerships if the timing and situation is right.”

While much of VMC has been completed and it has become a population hub, there’s more development still to come. It’s therefore important to provide better linkage between VMC and Colossus Centre.

“We’re working with the city and the province on building a secondary overpass over the 400 to link to the southern part of the VMC,” said Katipunan.

Menkes top 2021 condo seller, plans to keep up the pace

Steve McLean Commercial Leasing Greater Montreal Apr. 5 2022
Steve McLean Business reporter
Steve is a veteran writer, reporter, editor and communications specialist whose work has appeared in a wide variety of print and online outlets. He’s the author of the book Hot Canadian Bands and has taught reporting to college students. He is based in Toronto.