A nearly fully occupied downtown Ottawa office building is being sold to True North Commercial RE... 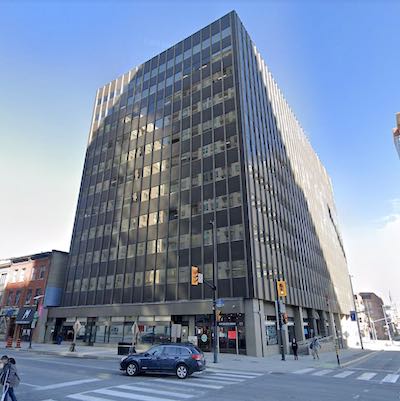 This 174,000-square-foot, 11-storey office complex at 400 Cumberland St. in Ottawa is being acquired by True North Commercial REIT. (Google Maps)

It is 98 per cent occupied and virtually all of the leased space is allocated to a federal government tenant. It also contains a small retail component.

“We are excited to add this downtown, transit-oriented property to our portfolio,” said Daniel Drimmer, the REIT’s chief executive officer, in the announcement Thursday afternoon. “The REIT stands to benefit from cash-flow accretion through the redeployment of the proceeds from the forward sale of 32071 South Fraser Way, Abbotsford, B.C., a lower-yielding property with a shorter duration lease, into a higher-yielding property anchored by the federal government of Canada with a long-term lease.”

The lease has six-and-a-half years remaining in the term, according to information from True North.

“This transaction signifies the REIT’s commitment to strengthen its position in Ottawa with the highest quality tenant in Canada and will further capitalize operational efficiencies with our existing assets in downtown Ottawa,” Drimmer said in the release.

True North says it will fund the acquisition via:

The building was certified LEED Gold in 2020 by facility manager Colonnade BridgePort, on behalf of KingSett Capital.

It is located at the edge of Ottawa’s vibrant Byward Market district and just a few blocks from the Parliamentary Precinct.

The building fronts onto one of the city’s main east-west downtown corridors, Rideau Street, and is a five-minute walk from the Rideau Station LRT stop, which is located in the Rideau Centre shopping mall.

In addition to the floor space, it also includes 53 underground parking stalls.

Ottawa’s office market is considered one of the most resilient in the country, with its mix of government and government-related tenants and what has been a steadily growing tech sector in recent years.

According to the most recent Cushman & Wakefield Canadian office stats, the city had an overall vacancy rate of 9.6 per cent in Q2 2022, behind only Vancouver (at 8.7 per cent).

The REIT owns and operates a portfolio of 46 properties with approximately 4.8 million square feet of space in urban and select secondary markets across Canada. The REIT is focused on growing its portfolio principally through acquisitions across Canada.