“Two Men And A Truck, the movers who care.” 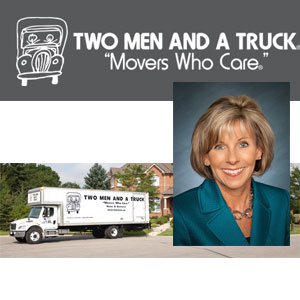 That simple yet catchy jingle receives plenty of play on the Toronto radio station I listen to most, but it’s just one of the reasons why Two Men And A Truck has experienced more than 60 consecutive months of growth and completed five million moves.

“Americans move a lot and now Canadians are as well,” said Melanie Bergeron, chair of the American company that opened its first Canadian franchise in Hamilton in 2005. “The market is more ripe here than in other countries that we’re in.”

Two Men And A Truck was formed in Lansing, Mich. in the early 1980s as a way for a mother to help her two high school-aged sons make extra money with an old pickup truck. The company has since become the fastest growing franchised moving company in North America and grown to more than 320 locations in the United States, Canada, the United Kingdom and Ireland.

Heron Capital Corporation, which was formed in 1997 to target small and emerging businesses with North American growth potential through franchising, acquired the Canadian master franchise rights for Two Men And A Truck in 2005.

It’s part of the Heron Group of Companies, which has a major focus in the real estate development and residential building business. An affiliation with a residential and commercial moving company made synergistic sense for both sides.

“We’ve worked with an international consultant that tries to find businesses that complement moving, like a real estate company,” said Bergeron, who officially joined the family business in 1989 when she was awarded the first Two Men And A Truck franchise in Atlanta.

“It’s a perfect fit with the Heron Group here and we’re looking to duplicate this type of relationship in other countries.”

By far the biggest share of Two Men And A Truck’s business still originates in the U.S. It has a handful of locations in the U.K. and Ireland and is looking at expanding into Mexico and perhaps other countries. Particular attention is being paid to Canada, however, where most branches are currently in Ontario.

There are 27 Two Men And A Truck locations in Canada after a new one opened in Halifax on April 26. New locations in Calgary and Edmonton will follow during May and June. Bergeron believes 48 Canadian franchise sites is an optimum number.

“Heron Group, because they’re familiar with franchising and know how important it is who you bring on board, has a very, very strong team. They’ve never had a lawsuit and their customer satisfaction scores are very, very high, so we’re super proud of them as our partners.”

There’s no hesitation about moving into Alberta, which has had a struggling residential and commercial real estate market since the bottom dropped out of oil prices more than a year ago, since many companies are downsizing and individuals may be moving to seek other opportunities.

“The only bad thing I’ve seen was when the U.S. housing market fell out in 2007 and 2008 and the phones stopped ringing because nobody was moving,” said Bergeron. “But we retooled and became more efficient, so in the long run it was kind of a healthy thing to go through. I just never want to go through it again.”

“Not many have storage units and it’s not a big part of our business model, but it’s becoming more of one,” said Bergeron.

“When you have a moving business, you need a small office with a lot of parking for the trucks and all the employees. A lot of times in order to get that space it also comes with a warehouse. Then they’ll start storing.”

Two Men And A Truck prides itself on core corporate values, one of which is giving back to the community. It does that in the U.S. by donating 10 cents from every move to the American Cancer Society, which has added up to almost $1 million over the years.

Two Men And A Truck is part of The Mikey Network

Heron Group has a commitment in Canada to The Mikey Network, which places public access defibrillators in as many high-risk locations as possible so people affected by sudden cardiac arrest might have a second chance at life. Each of the approximately 100 Two Men And A Truck vehicles across the country is also equipped with the defibrillators.

“It’s a really wonderful and unique way that they give back to Canada and the citizens that live there,” said Bergeron. “Their headquarters and their franchisees really care about our core values.”

Bergeron gave a keynote address at the Canadian Franchise Association’s 25th annual national convention in Ottawa on April 19 and tried to impart knowledge that would make the franchising journey of others easier than that of Two Men And A Truck.

“We learned everything the hard way, being a family business, but it’s been worth it now that it’s behind us,” she said. “It’s just a family affair with franchising and I’m excited to see the good work that Canada is doing.”