The United States apartment market is ahead of the curve compared to Canada, and two experts from Dallas, Texas conveyed their experiences on June 21 at the North American New Apartment Construction and Mixed-Use Symposium and Expo at the Metro Toronto Convention Centre. 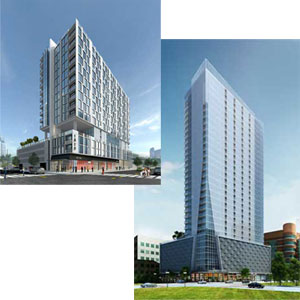 “The U.S. multi-family apartment market has been on an incredible tear,” said Jay Denton, senior vice-president of research and analytics company Axiometrics Inc., with five per cent annual rent growth and an occupancy rate of about 95 per cent.

Denton stressed that strong on-site management is important in achieving annual rent growth and he acknowledged that apartment real estate income trusts outperform the U.S. average in rent growth because they have good management in place and have more tools at their disposal than smaller landlords which make it easier for them to find out the best properties to buy, where to build and when to do a value-add project.

While the U.S. apartment market is healthy, Denton acknowledged that there are challenges in some suburban areas where there’s still a stigma attached to purpose-built rentals and it’s difficult to build new ones because these municipalities don’t want them.

While it’s also difficult to build new apartments priced for the lower or middle tiers of the market, the U.S. has an advantage over Canada in that it continued to develop apartments through the late 1970s, ‘80s and ‘90s when construction of such projects came to a virtual halt north of the border due to rent control legislation.

“Those are lower priced properties and if we didn’t have those it would be a much different environment,” said Denton, noting that total and per capita apartment inventory is much higher in the U.S. than in Canada.

Humphreys & Partners Architects, L.P. president Greg Faulkner said his firm works with the top developers in the U.S. and is responsible for about 30,000 conventional apartment units a year. The company does 95 per cent rental buildings and five per cent condominiums because that’s what millennials want. (Image shows two Humphrey & Partners designed apartments in the U.S.)

“We’re talking about rents, net operating income, land costs and how to back into these things to get them built. We know hard costs around the country because we’ve got projects all over.”

Faulkner noted that average unit sizes have dropped from 1,000 square feet to between 700 and 800 square feet over the last decade and that mixed-use projects have become more common in recent years.

Read other Property Biz articles from the same conference.

Jennifer Nevitt on how to maximize apartment rents, June 30, 2016