The False Creek Flats area of Vancouver is the last bastion of opportunity for creating a diverse mix of industrial and residential space in the heart of the city. 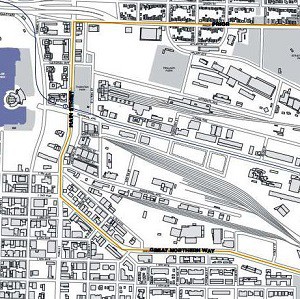 The False Creek Flats area of Vancouver, shown in a development report from the City of Vancouver.

Bordered by the burgeoning tech hub of Mount Pleasant and by the Downtown Eastside, it’s an underutilized, under-densified and rundown area of the city.

The fast facts: it’s 450 acres with 350 buildings (more than half over 50 years old), representing 15 per cent of the city’s industrial land base.

And yet, as most Vancouverites know, there is much cool stuff happening down there.

There are MEC, The Centre for Digital Media, the new campus for Emily Carr University of Art and Design, craft breweries, local food manufacturing (Commissary Connect is one of my favourite new companies), biotech firms, dozens of cool startups and the future new home of St. Paul’s hospital.

This is the final frontier for industrial redevelopment in the heart of the city. Given our struggle with industrial land supply, as reported here recently, you would think the city’s announcement this week about its new zoning and development plan for the Flats would have received a warmer round of applause.

The plan is to double job space on the Flats to 11 million square feet, up from the current 5.4 million, targeting existing industrial users as well as those in the “innovation economy.”

The problem with the plan is that it’s short-sighted and includes an allowance for just 1,400 residents. Why council would create a zone that limits housing, especially right beside one of the city’s busiest transit stations, is perplexing.

With a potential for 20,000 jobs in the area, the Flats could have struck a beautiful balance between residential and industrial/office spaces, creating a vibrant hub for people who want to live where they work, a new community that would have been an exciting place to be – day or night.

Without compromising industrial space, the plan could have encouraged innovation not just in the future industrial users, but in building taller to accommodate for a mix of housing space.

It seems lacking in vision to create a suburban-style office and industrial area in a city struggling with affordable housing and retention of skilled employees. As Urban Development Institute president Anne McMullin told the media, it’s “a lost opportunity.”

It is definitely a baby step in the right direction, but it’s not ambitious enough. It’s not what I would expect from the leaders of Vancouver, leaders who know why our city works and why people want to live here. We have become famous around the world for our insight into urban planning.

We have our own word for it.

As the late, renowned architect, Bing Thom said about Vancouverism: “It’s this idea of having a lot people living very close together, mixing the uses. So, we have apartments on top of stores. . . . This mixing of uses reflects Vancouver in terms of our culture and how we live together.”

Why not listen to Thom and encourage a blended, dynamic community in the Flats? In 10 years, maybe less, we will need taller buildings and more space – both for new businesses and residents. Why not build it now?

“There is room to grow the [False Creek Flats] vertically,” McMullin told Business In Vancouver. “The area can absorb higher levels of transit-oriented density with much less community opposition than the more established communities along the SkyTrain lines.”

Jarvis Rouillard, vice-president at PCI Developments and president of the board for NAIOP (the Commercial Real Estate Development Association) admires the intention of the plan: to protect important industrial uses and jobs vital to serving the growing inner city.

However, he says the plan doesn’t provide for the zoning flexibility and amenities required to attract the coveted innovation and tech economy users to areas throughout the Flats.

“Attracting innovative tech users, whose environment preferences are constantly evolving, is largely driven by the ability to provide them with a setting suitable for hiring and maintaining their employee base,” says Rouillard.

Including a variety of housing and purpose-built rental accommodation would create a true, mixed-use community. This inclusion would not be at the expense of job space density, but would complement it.

“We suggested that more density should have been considered directly adjacent to the rapid transit stations (existing and future stations),” says Rouillard. “Unfortunately these views were not shared by those driving the plan forward.

“But given the inability of new housing supply to keep up with demand and the substantial proof that mixed-use supply is the solution, this is a lost opportunity to marry commercial and residential space together as each would facilitate the success of the other.”

The future of the Flats could have offered a solution to some of our struggles with affordability, employee retention and industrial supply, all while creating a dynamic and vibrant new neighborhood.

Many people are disheartened the city took 20 years to come up with a plan that doesn’t take into account the reasons Vancouver works and continues to draw people to its increasingly overcrowded shores.