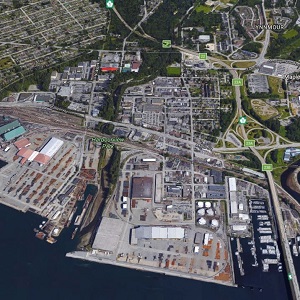 In fact, the city could run out of industrial land in less than a decade, CBRE says. If it does, the problem could have “serious consequences” for the growth of both Vancouver and the province of British Columbia.

“We are in a robust supply cycle that came on in response to demand, but demand continues to outpace supply and continues to grow at an exponential pace and we can’t keep up,” Chris MacCauley, senior vice-president at CBRE in Vancouver, said in a release Monday.

The industrial availability rate is the lowest in North America, CBRE says.

“We are facing an extreme supply crunch that will have serious consequences for the future growth of business in B.C.,” said MacCauley. “If more industrial land is not made available for development, it will stifle the economic growth of our province.

“It will prevent existing companies from growing and there won’t be room for new entrants into the market.”

The report says the industrial availability rate was at just 2.7 per cent, lower than the previous record of 3.6% in 2008. A strong leasing quarter is responsible for the drop, as absorption hit 1.98 million square feet in the quarter.

That more than ate up the 850,000 square feet of new space that became available.

Vancouver’s construction and manufacturing boom, combined with a strong showing in the film sector and e-commerce growth, is leading the demand.

“We anticipate the availability rate will dip further in the second half of this year,” says MacCauley. “We need more all-encompassing solutions to the supply crunch.”

Availability of space is even lower, at just 2.2 per cent according to the CBRE report. One year ago, there was a 4.1 per cent availability rate and a 2.6 per cent vacancy. At the end of Q4 in 2016, availability was at 3.9 per cent and vacancy at 2.4 per cent.

Stacked industrial not a solution

A trend toward stacked industrial in the city – including high-profile buildings such as the Ironworks, or other projects by developer PC Urban – won’t solve the problem.

“We often hear the suggestion that simply building multi-level warehousing is the solution to the problem of Vancouver’s lack of industrial supply,” MacCauley said.

“However, what most commentators don’t realize is multi-level warehousing is only feasible for a very small segment of industrial users. Building up is not going to solve our problem, we need to think bigger.”

Despite the amount of new supply, CBRE said there is only one existing building over 100,000 square feet available in Metro Vancouver. That has forced companies to look elsewhere, with 64% of all leasing activity moving outside the city to areas such as Surrey and Delta to the south and east.

The report cites two examples, including the recent Molson Coors Brewery project announced for Chilliwack. The brewer has sold its Burrard Street location, and couldn’t find a 35-acre site that could accommodate a 400,000 square foot plant west of Chilliwack.

CBRE says an “international transport company” was seeking 200,000 square feet and looked to Surrey, an area not previously favoured by that type of business.

The crunch is also leading to a surge in asset value. CBRE says average sale prices for industrial transactions are at $271 per square foot, up 15% from the 2016 average.

It predicts the record prices will continue to rise, though overall total dollar volumes for sales will decline due to a lack of product available on the market.