After years of interest from many Vancouver multifamily property owners, one of the city’s most i... 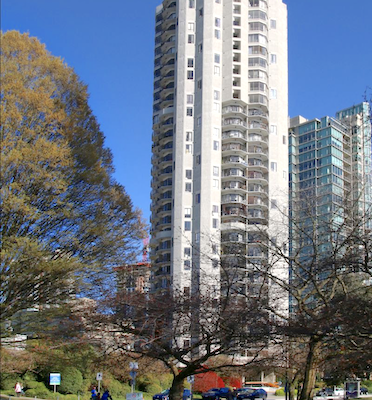 Mayfair Properties is the new owner of the Martello Tower in Vancouver. (Courtesy Goodman Commercial)

After years of interest from many Vancouver multifamily property owners, one of the city’s most iconic rental apartment towers has been sold. The waterfront Martello Tower at 1011 Beach Ave., is now owned by Vancouver-based Mayfair Properties Ltd.

The 30-storey concrete tower at the corner of Beach and Thurlow Street contains 220 units and has the potential for intensification on the one-acre lot, and Goodman Commercial Inc.’s Mark Goodman told RENX both those factors were key to the transaction.

“It’s attracted a lot of attention over the years from major players in Vancouver and across Canada because it’s an iconic building,” Goodman said. “It’s one of the biggest rental complexes in the province, it’s a single tower with 220 units, it is also located in probably one of the premier locations in North America, waterfront in Vancouver. And it’s close to everything.

“It’s a unique-looking building. It’s iconic. It’s got scale. It’s waterfront. It’s Beach Ave., which is like the golden mile. And also it’s got infill opportunity so they’ve had a lot of interest in that, and discussions with the city. There is very viable development opportunity to build another rental facility in situ.

“It kind of checks all the boxes.”

About the Martello Tower

Financial details of the transaction, which was conducted as a share sale, have not been released. While Goodman was able to speak in general terms about the property, he was not able to comment on particulars of the deal due to confidentiality provisions.

The previous owner was listed as No. 260 Seabright Holdings Ltd., in sale documents provided by Altus Group and RealNet.

It has a combined 407 feet of frontage along both Beach and Thurlow Streets.

It also has 156 underground parking spaces and 52 surface spaces.

Mayfair Properties is an owner and operator of hotels, multiresidential, commercial and storage properties across Metro Vancouver and Vancouver Island. Its multifamily portfolio includes both high-rise and low- or mid-rise properties, including the nearby, 23-storey Beach Apartments at 1133 Beach Ave.

Its hotel portfolio includes several well-known properties, including the new Hotel BLU at 177 Robson St., the Hampton Inn and Suites by Hilton in downtown, and two Best Western Plus properties in Victoria (the Carlton Plaza and Inner Harbour hotels).

Goodman said when he posted about the sale of the tower on Goodman’s Facebook page the response “was just through the roof,” including more than 12,000 views and over 1,000 engagements.

“It was a fever pitch. We did about $350 million, Cynthia (Jagger) and I at Goodman Commercial, in the first four months of this year,” he observed. “That is insane. It was made up of 15 or 16 properties ranging from smaller $5-million deals to much bigger deals. Land, rental, apartment buildings, some high-rises, some commercial.”

However, Goodman said the landscape has cooled in recent weeks. He’s not sure, yet, why things have become more quiet but suspects it’s a number of factors.

“This is not exclusive to multifamily nor other commercial asset classes, nor single-family residential,” he explained, though he also said there does seem to be more product on the market.

The potential for rising interest rates, the difficulty acquiring insurance for some multiresidential properties and rising costs including for construction materials (for properties that might need renovations), could be contributing factors according to Goodman.

However, so far pricing for assets has not been affected.

“Does that mean prices have come off? No. I haven’t seen any changes in value,” he said. “I think the market is still strong. Perhaps the slowdown will be good for pricing, it’s too early to tell.”