Metro Vancouver commuters and transporters are enjoying new and improved bridges and roads, but a severe shortage of industrial space to lease or buy continues to bottleneck the movement of goods and people, say local stakeholders and experts. 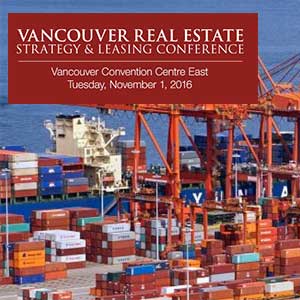 The shortage of space, coupled with demand from new businesses to be closer to downtown Vancouver, has also put pressure on sales prices. “That’s why you’re seeing $2-million per acre,” Hester said speaking as a panelist at the Vancouver Real Estate Strategy and Leasing Conference on Tuesday.

Since the 2009 opening of the Golden Ears Bridge that linked Langley to Pitt Meadows and Maple Ridge across the Fraser River, several other major projects have followed. The new $3.3-billion 10-lane Port Mann Bridge opened in 2012, expanding the Fraser River link between Surrey and Coquitlam.

The following year, various layers of government marked the opening of the South Fraser Perimeter Road, a new 40-kilometre four-lane highway along the southern banks of the Fraser that connects to all five major river crossings, reducing travel time from Highway 1 to Delta marine port.

“Without a doubt, the infrastructure upgrades the governments put into place have positively impacted our clients across the region,” said Hester.

“Many, if not all, of my clients have agreed that these upgrades have been amenable over the last three years.”

However, traffic remains generally terrible for most commuters across the region, he added. “But in terms of our industrial users, it’s actually better than it was three, four years ago.”

He said the industrial parks are now better connected, giving companies more flexibility to choose locations around Metro while still being able to access clients or suppliers.

The case of Arc’teryx Equipment

In late 2015, Arc’teryx Equipment — a state-of-the-art Vancouver-based outdoor equipment maker — leased a 240,000 sq. ft. factory and warehouse space in New Westminster’s Queensborough Logistics Park. Queensborough is a section of land east of Richmond wedged between two arms of the Fraser River and linked to the rest of Metro Vancouver by six bridges.

“We used to have two sites in Burnaby,” said April Chen, the company’s supply chain director. She said they opted to move to New West for cheaper lease rates, but also because it was close enough to their headquarters in North Vancouver so management could access the factory quickly.

Arc-teryx was able to convince their parent company that a move to Ontario or the U.S. would not be the right choice for the brand, despite being cheaper than Vancouver, Chen said, highlighting a need to be close to their mountain testing grounds and near their pool of highly-trained manufacturing staff.

It was very important for the brand to remain in the Vancouver area, she said. “However, from a transportation and employee perspective, it’s been a big struggle for us,” she said. “We’ve seen some loss in our current employee retention.”

She said may staffers are not willing or able to drive or take transit to Queensborough. “The bridges are killing us,” she said. Chen said the next five years could see them outgrow their current spaces, clouding their future in Vancouver.

Vancouver a crucial link to the rest of Canada

“Sixty per cent of our GDP absolutely directly depends on trade,” she said. “We need to absolutely keep that at the forefront of what we’re doing when we come up with goods movement strategies.”

Ashcroft Terminal is in the B.C. interior. It’s the last location westbound and the first location eastbound at which mainline traffic can stop when coming or going from Metro Vancouver.

About 97% of goods exported to Canada through the Lower Mainland are consumed outside of the region, she said, citing her own figures. “The rest of it is going out.”

Using the example of exporting forestry products on rail out through Metro Vancouver, Landucci said it can take up to four truck trips to transport the containers from the rail line across the city to Delta marine port.

She said Metro Vancouver lacks well-placed industrial space and faces poor coordination in planning and data sharing. “That’s why we have a line-up at Delta Port of empty containers,” she said. “It’s an absolute mess… We call this the spider web.”

She said its time to recognize that industrial capacity in Vancouver may be tapped out. Industrial business “should move to wherever there’s the most cost effective way and the most sustainable way for that business to continue to thrive”.